For the first time this year, Egypt became one of the host countries of the Youth Challenge 2.0, which is one of the GenU initiatives.

This was done under the auspices of the Minster of Youth and Sports and in collaboration between MoYS, UNICEF, UNDP and Plan

Egyptian youth from all over the country submitted their business ideas and five ideas were selected for the semifinals. During the ceremony held to announce the two finalists, UNICEF team had the chance to listen to the reflections of the team members of Handtopia whose idea was submitted to the global jury to compete with 72 ideas from 36 countries.

In this photo essay, we explore the story of young Egyptians from different backgrounds united under one idea: reviving indigenous and traditional handcrafts.

UNICEF/Egypt 2020/Mohamed Ragaa
Nevin Iskander, a 23-year old pharmacy student, is the team leader of Handtopia team. Handtopia's business idea aims to leverage modern technology to revive indigenous and traditional handcrafts from marginalized and remote settings and border governorates, connect them to new markets and promote youth employment and self-employment in this field. She says: "As I explained the idea of our project to foreigners, I felt that we, Egyptians, have a great asset. I became more into nature and the environment because of the project, and I felt that I had an ambition that could be implemented."

UNICEF/Egypt 2020/Mohamed Ragaa
"Our differences do not set us apart. They complete us." Fatma Gomaa, 22 years old, is a graduate of theology and philosophy of Al-Azhar University. Handtopia uses digital platforms, including a mobile application and a Facebook page, to help traditional handcrafts get further introduced to the market. It also helps them with networking, learning and getting inspired from each other.

UNICEF/Egypt 2020/Mohamed Ragaa
"I am connected to the project by emotions more than work. I am proud of what each of us is doing and that I know people doing something like this." Alaa Muhammad, Faculty of Commerce, Ain Shams University. The local jury convened by the end of August to select the most two promising business ideas, among which was Handtopia.

UNICEF/Egypt 2020/Mohamed Ragaa
"I am proud that I got to know the people in this team. It began as a dream, then it became a reality on ground." Abdul Masih Khalaf, a student at the faculty of medicine.

UNICEF/Egypt 2020/Mohamed Ragaa
"I felt that I found my passion in this project. There were a lot of disagreements, but ultimately we were able to reach to an agreement." Fatima Adel, 21 years old. Bootcamps, intensive business development and sector-specific support was provided to the 5 teams over a period of 2 months.

UNICEF/Egypt 2020/Mohamed Ragaa
Mina Masoud, 22 years old, is a graduate of the Faculty of Law, Ain Shams University. He says: "I liked the team before I liked the project. That's why I would like to continue with them whatever we will do as this loving spirit will encourage us to work. For me, friendship is the motivation for work, not the other way round."

UNICEF/Egypt 2020/Mohamed Ragaa
Abdel-Rahman Alaa, 21 years old, who studies at the Faculty of Science, says: “In Handtopia, I do more work than I would have done in a regular job. Because I like what I do, sometimes I work for 20 - 22 hours continuously and sleep for two hours!”

UNICEF/Egypt 2020/Mohamed Ragaa
Muhammad Gamal is one of the facilitators of the Youth Challenge, and he was responsible for creating the Handtopia team and coordinating between its various members. He says: "I was honored to get to know them. I was with them from the first moment on the WhatsApp group, I was hoping that I personally was a member in their team!" 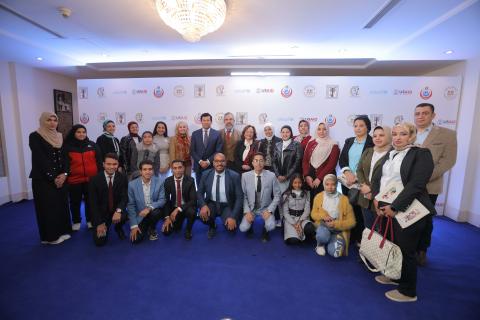 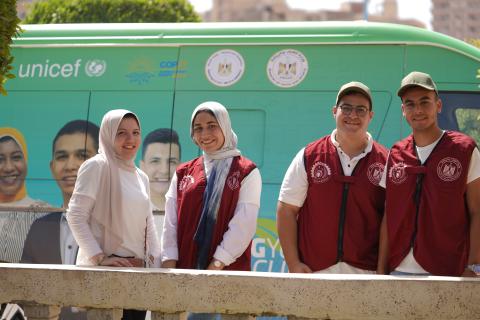 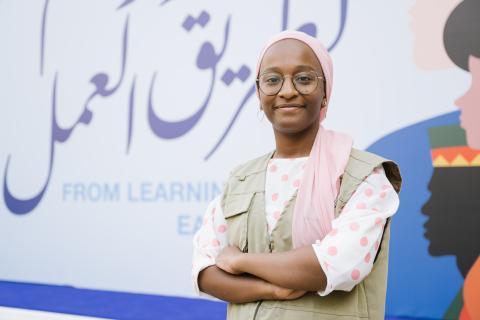 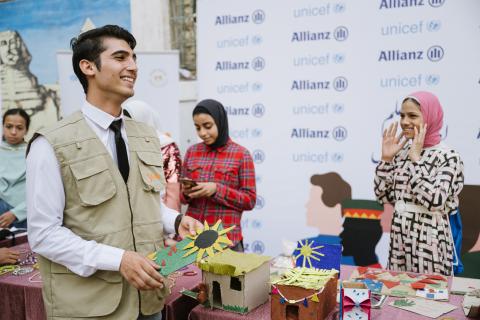