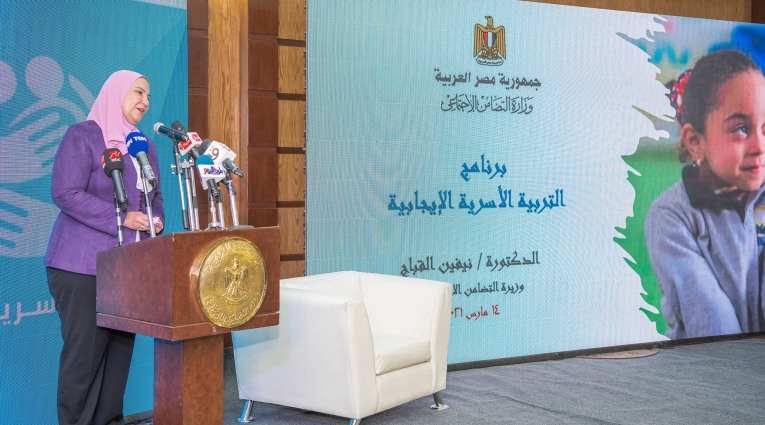 Cairo, 14 March 2021 – H.E. Nivine Al-Kabbaj, Minister of Social Solidarity, launched today a positive parenting programme, in cooperation with UNICEF and with the support of the European Union. The launch witnessed the participation of H.E Ambassador Christian Berger, Head of the European Union Delegation in Egypt, Mr. Jeremy Hopkins, UNICEF Representative in Egypt, and Dr. Sahar Al-Sunbati, Secretary General of the National Council for Childhood and Motherhood, and a number of experts, in addition to the participation of civil society organizations concerned with childhood and family issues.

The programme offers to most vulnerable families; community-based groups sessions on key parenting domains including; proper care, emotional and social support, health and nutrition, learning and cognitive development and Positive discipline through which families gained knowledge on child marriage, violence, FGM and education.

The Ministry of Social Solidarity adopts the concepts of positive parenting within the package of interventions for social protection and early childhood development programmes. The programme presented the curriculum implemented in villages and governorates of ‘Decent life’ initiative. The programme also uses the interactive communication platform of Social Solidarity in documenting and following up with families in need of advice on family and education issues through communication via mobile phone for free (message) on the number 1442.

H.E. Nevin El-Kabbaj, Minister of Social Solidarity, said that Egypt is witnessing a new era of positivity, construction and investment in people, as well as an era that restores the positive relationship between the family and its children, noting that positive parenting for the Ministry of Social Solidarity is a constitutional and legal obligation in the first place, as it is one of the dimensions of development, sustainable and social protection for the Egyptian family, especially the most vulnerable families.

The Minister of Social Solidarity added "The most important axes of positive parenting adopted by the Ministry of Social Solidarity are primary care, early childhood development, social upbringing, emotional and psychological development of the child, and positive discipline, noting that Egypt has achieved a great development in the field of childhood development indicators. In the last two decades, the enrollment rate of children in the primary stage has reached about 99%, and the mortality rates for children before five have decreased to 19.5 per thousand births in 2017, in addition to the coverage of basic vaccinations for children."

H.E. Nevin Al-Kabbaj thanked UNICEF, the European Union and the National Council for Motherhood and Childhood, expressing her happiness with working with them on the positive parenting programme, which is the outcome of combined experiences adding that we are about to reach a golden age in Egypt in which new positive values ​​based on human rights and the rights of the child are an integral part of it.

“The feedback received from parents and social workers engaged with the programme is positive and we are pleased to see that families are also easily interacting with the RapiPro that has already been tested by more than 100,000 households” said H.E. Nivine El-Kabbag, Minister of Social Solidarity of the Arab Republic of Egypt.

From her side, Dr. Sahar Al-Sunbati, Secretary General of the National Council for Childhood and Motherhood, said, “Before we raise our children, we must first discipline ourselves, indicating that it is time to open the file of positive parenting within the family and address it in a fruitful manner.”

Dr. Sahar added “There are many branches through which the National Council for Childhood and Motherhood will work with the Ministry of Social Solidarity, noting that the launch of the positive parenting programme will be a life style for the future of Egypt, because in order for our country to be properly built, we have to properly educate our children.”

“Positive parent-child interaction is an essential requirement for early childhood development and to prevent violence against children. Evidence has shown that children who receive attention, care and affection, as well as consistent nonviolent discipline, are more likely to achieve their full development. They learn social skills and make a meaningful contribution to society and they are also more likely to transfer these skills to their own children” said Mr. Jeremy Hopkins, UNICEF Representative in Egypt.

"Worldwide, the EU and Member States are investing significant resources to support life-changing programmes for children, including in Egypt with its young population.  Through EU cooperation with Egypt, we are proud to have contributed to an approach promoting ‘Positive Parenting’, as an enabler for child development and protection from violence. This type of support has gained significance right now during the Covid-19 pandemic where children and adolescents are amongst those affected most.  In cooperation with our partners in government, civil society and UNICEF the EU remains committed to the promotion and protection of child rights in Egypt." Head of the EU Delegation to Egypt, Ambassador Christian Berger, noted.

Toward that end, the formative research on positive parenting indicated that almost all boys and girls have been to school, with only approximately 2 per cent with no education. However, gaps in parental knowledge, attitude and practices related to breastfeeding, handwashing, oral hygiene and food diversity are widespread. Interviewed parents were more than twice as likely to report the importance of education in helping their boys find a better job in the future, as compared to their girls.

The parenting programme led by MoSS is part of the Government of Egypt’s growing priorities to positive parenting as a strategic intervention to promote the wellbeing of children and families in Egypt. 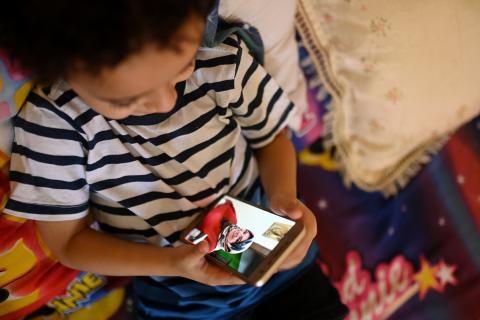 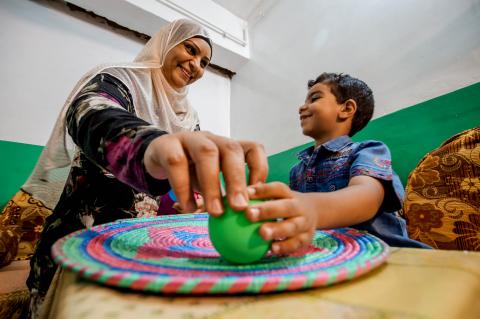 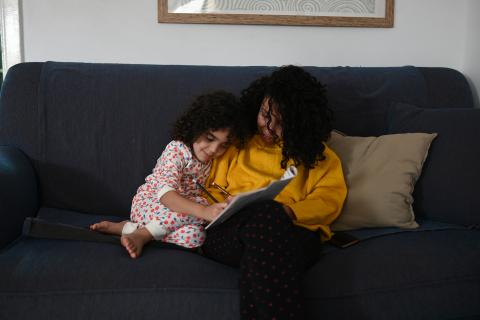 Alia in the House

How little Alia spends her day during COVID-19 pandemic 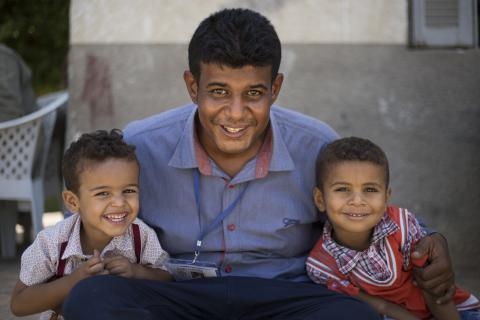