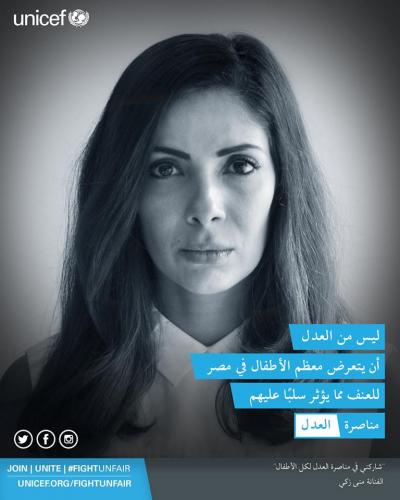 Mona Zaki is a leading star in the Middle East. She was only 13 years old when she made her first theatrical performance “Bel Araby Al Faseeh” with the famous Director and Actor Mohamed Sobhi. Mona is married to popular Actor Ahmed Helmy and they have three children, Li Li, Selim and Younis.

Aside from her acting talent, Mona is well-known for her various contributions to many national charity and advocacy campaigns.

In July 2009, she participated in a campaign in collaboration with UNICEF in protecting the lives of babies. As an actress and a mother, she stressed on the importance of Vitamin A to the health of babies. In the same year, Mona supported Yanabee El-Hayah initiative for blood donation campaigns.

In 2015, Mona participated in the #FightUnfair social media campaign of UNICEF aiming at shedding the light on the challenges facing children and young adults in Egypt. The campaign tackled pressing issues like malnutrition, child labor, and poverty. Mona focused on the negative effect of violence on children.

More to Know About Mona's work with UNICEF Egypt

In June 2017, On the National Day of FGM, Mona dedicated a social media post to raise awareness on the act of FGM. Mona expressed that FGM/C cannot be justified on the grounds of religion or culture, and that it is a clear violation of human rights, that has a devastating and lasting physical, health and psychological impact on women and girls, and is a barrier to progress and development.

At the same year , Mona took part in a fundraising function in Dubai in favor of UNICEF’s “No Lost Generation” initiative to provide learning opportunities to children caught up in the conflict in the region.

On 20th of November 2017, Mona celebrated with 200 children the World Children Day, under the theme "Children Take Over”. The children got to learn through role-play about different professions, encouraged to lead and express themselves, and they also got to interview Mona and asked her how the world would be like if it was ruled by children.Mona spent the day with the group, which was composed of children from Upper Egypt (potential community schools’ students benefiting from EU-funded project), Syrians and Sudanese children on the move, children without parental care and children with disabilities. 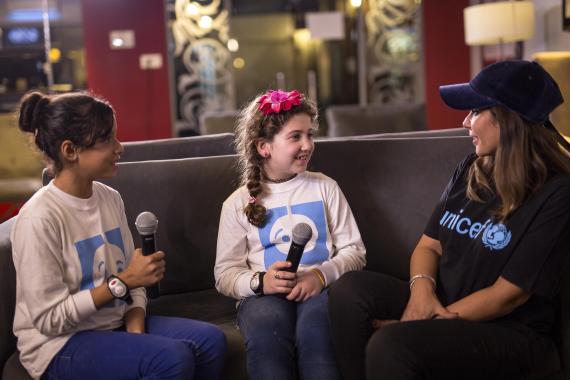