Nino is one of seven children who now lives in a specialized family type service for children with severe and profound disabilities in Tbilisi, Georgia.

With determination and passion, 4-year-old Nino picks up a broom and starts sweeping the floor with one hand, while the other one turns the wheels of her wheelchair. It’s typical toddler behavior - for some reason sweeping floors is a passionate hobby of most kids. But for Nino, it’s something you wouldn’t have guessed she’d be able to do merely a year ago. When she was three, she lay in bed, lethargic, in a large public institution for children with severe disabilities who had been left in the care of the state.

Nino is one of the seven children who now lives in a specialized family-type service for children living with severe disabilities in Tbilisi, Georgia. The service — together with one similar family home in Kutaisi, Georgia’s second largest city — opened October, 2018, and provides a family-like care setting, individualized support, and access to medical care to treat complex health problems. And recently, they received wheelchairs from the McLain Association for Children, Georgia (MAC Georgia).

Born with Spina bifida, Nino’s spine and spinal cord didn’t develop properly in the womb, causing a gap in her spine. Her parents left her in the hospital a few days after giving birth to her. “They were probably worried that they wouldn’t be able to afford care, or worried that their community may not have accepted her,” says Lela Kiknadze, manager at the service, through the NGO Divine Child Foundation of Georgia. Unfortunately, people with disabilities are still seen as a burden on society by many, and it’s been said that doctors recommend parents to leave their babies at the hospital if they have disabilities, assuring parents that they won’t live long lives and would be bed-bound their entire lives.

Spina bifida can cause weakness or total paralysis of the legs and possibly damage the brain during birth. Usually, kids don’t have intellectual disabilities, but some have learning difficulties. For Nino and her best friend Natia, their diagnosis was bound to have more severe consequences. For three years, Nino and Natia lay in bed, in a large institution, together with 40 other children, the first years of their life. Unable to speak, unable to communicate, unable to move.

But in October of 2018 Nino and Natia moved to the country’s first specialized family-type service for children living with severe disabilities.

"It’s like watching blossoming flowers, they just realized this space was theirs, and theirs to discover."

And every day, they discovered a little bit more, learning how to move their bodies. Never having been able to move around, and being partially paralyzed, moving around — for all kids at the care home — meant crawling.

While Nino had gotten more active, crawling around the home with speed and finesse, her favorite activity definitely was sitting in the only wheelchair available at the home. But so did her best friend Natia. And on more than one occasion the girls fought for the chair.

And that is exactly why the kids screamed with joy the day the wheelchairs were brought in.

In the hours after the unpacking, through the support of UNICEF, professionals made sure each wheelchair would fit each of the kids, they also trained the caretakers in how to handle the wheelchairs. Nino needed a band around her chest, the experts quickly realized. “She was so enthusiastic that she’d move her whole body forward hoping to go faster.” - manager Lela says.

Five wheelchairs were purchased by MAC Georgia for the kids, a sixth one has been ordered by UNICEF — as it’s an electric wheelchair for one of the boys who suffers from severe spasms.

When the specialized family-type service  opened in October, Nino and the others couldn’t even make eye contact. A few months in, they were enthusiastically crawling around and playing, and now Nino moves around in her wheelchair with the same speed and manner as any other 4-year-old walks around. Her next task is talking, as she’s clearly practising — telling her caretakers “Again!” while she draws colorful flowers in a notebook. Less than a year ago, no one would have thought Natia, Nino and their friends in the house would have developed as much as they did.

"They came in hardly moving, they didn’t make eye contact, I thought we’d be taking care of them mostly in this state. But now they are just like any other kid, just with some more challenges."

But it’s not the family-type service alone that improves the lives of Nino and her best friend Natia. They are starting kindergarten this year, together with other kids. And playing every day with children from their neighborhood will help Nino and Natia — and their friends from the home — build lasting friendships throughout their lives and increase the acceptance of people with disabilities within society.

“Nino started talking a little bit, she says some words, but really wants to say more. I am certain that interacting with children with better language skills will be extremely beneficial for her to increase her ability to communicate,” Lela explains. And all of this will make Nino’s disability something that doesn’t define her as a person anymore.

The centre is made possible through a partnership between, Georgia’s Ministry of Internally Displaced Persons, Labour, Health and Social Services, USAID, UNICEF and M2 Real Estate Company. 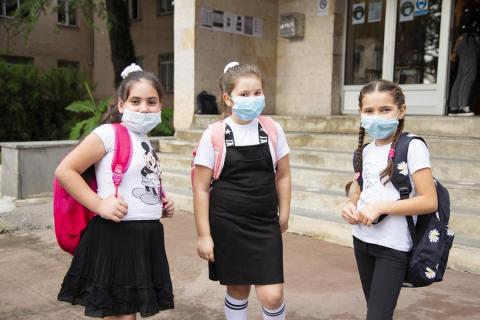 Both parents and children are happy to be back at school, and do not wish to return to distance learning 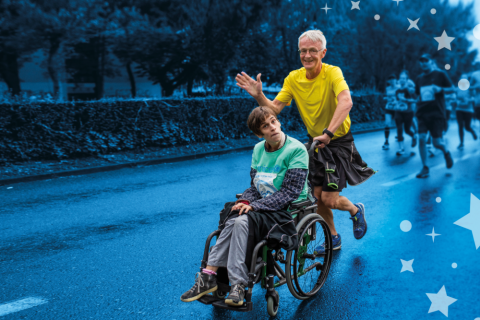 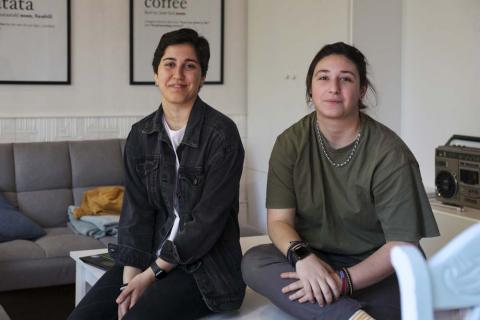 This chatbot is here to help

The winners of a hackathon for youth in Georgia are working hard to create a chatbot which answers all the burning questions kids may have.