In Ukraine, young people help others and dream big

Over 9,000 young people in Kharkiv, Ukraine, have benefitted from first aid courses, inclusivity workshops and sex education classes in schools, through projects imagined, developed and implemented -- by young people for young people.

“UPSHIFT Ukraine,” a programme implemented with UNICEF and the European Union support, promotes the development of entrepreneurial skills among adolescents.  It provides opportunities for teams to develop social impact projects addressing specific problems they have identified in their communities.  Launched in Kharkiv in 2018, the programme welcomed 60 teams among which 30 were selected for three months of support, consultancy services and seed funding.

Now, thanks to its success, UPSHIFT is expanding to Luhansk and Donetsk areas.

“When we had just started the project in Kharkiv around September last year, it was hard for me to imagine this bright festival with really great, cool projects and creative people who took on the responsibility to do something good,” says UNICEF consultant Olga Klymovska.  “I am very happy that this project started in Kharkiv – a city with many creative young people – and the project winners are an example for those who will participate in it in future.”

Medical student Dmytro Korotkyi and his friends saw how important first aid courses could be after accompanying ambulance crews in Kharkiv.

“If a person is in critical condition, unconscious, and requires resuscitation, you have just seconds,” the nineteen-year-old says. “There’s no time to panic or to think – you need to act calmly and clearly, step by step.”

Together with Daryna Kizman, Hanna Kondratenko and Khrystyna Slinchenko, Dmytro decided to open an inexpensive but essential first aid course in his home city. A big limitation, however, was funding.

Participating in UPSHIFT helped them achieve their dream.

“We saw an advert about a competition from UNICEF and the EU,” recalls Dmytro. “At first, we thought it would be impossible to win a prestigious competition like that. Then we talked and decided that we had nothing to lose if we applied.”

“At this age, children are very motivated. We could see how they tried hard and wanted to do everything well and right. It’s not easy for a child who doesn’t weigh that much to do chest compressions, but they tried very hard, and some did better than grown-ups.”

Khrystyna says the courses are what make their project unique.

“Our eight-hour course isn’t a dry lecture. You will find yourselves in different situations together with the instructor and learn how to deal with them easily. The reminder course will be shorter. We will invite our participants once a month to help them maintain their skills.”

Khrystyna was very impressed by one woman in Kharkiv who performed CPR on an unconscious man for 30 minutes. When the ambulance crew arrived, they were able to save the patient thanks to her efforts.

“That’s why we want to teach people necessary life-saving skills,” she says.

“I like both the idea and the process,” she says, painting views of her city onto the wax.” As a web designer, I like the part where I decorate them most.”

As a member of Kreavita, an NGO for people who live with disabilities in Kharkiv, Iryna worked with local schoolchildren to devise an inclusive candle-making and painting workshop space. The project participated in the sixth and final round of UPSHIFT and was recognized as the most promising.

Iryna says the workshop helps people with disabilities to not only earn money, but also socialize and fulfil their creative potential.

“People with disabilities are often perceived as not competitive,” she says. “That’s why we decided to create a project where they would be able to learn something and gain employment in the future, and local children would be able to develop, find friends and earn their first money.”

Kreavita used the money they received to purchase materials: paraffin, wicks and an acid used to harden wax.

As well as making and selling candles, the workshop holds free masterclasses for schoolchildren and others who wish to learn the skill.

“Anybody can come to our masterclasses,” says Iryna. “We are happy to share our experience. When we had just started the project, it turned out that there are no professionals who could teach candle-making in Kharkiv, so we needed to figure everything out ourselves. And now we’re happy to share this knowledge with children and adults.”

“They are hungry for knowledge and want to have a place where they can earn their first income. It’s great that healthy children can also work in the workshop. Everybody here communicates as equals.”

Polina Chyzhova says she did not have any friends before the StepUp project.

“I felt uncomfortable everywhere,” says the 16-year-old. “I couldn’t find my social group. But now, after participating in the project, I can even approach a stranger.”

Polina now has a good friend called Vika and a group of like-minded people with whom she can share her problems and fears.

She is one of 15 teenagers living with social difficulties who were paired with 15 volunteers of the same age. They were supported by trainers and psychologists as part of the StepUp project.

The course is the brainchild of three students in Kharkiv.

“In the future we would like to establish an organization that would defend the rights of difficult teenagers and help them adapt,” says co-creator and medical student Ivan Panasko. “For now, we decided to start small and hold a course for 30 children. Shy, angry, aggressive kids, teenagers with family problems, those who have been bullied or been bullies themselves can learn something about themselves and, most importantly, find friends.”

“The first part of the project was all about preparing us for communicating with difficult children,” says Vika Lutsenko, 15, one of the volunteers. “In our understanding, these are people who are withdrawn, who have no friends, who have moved from a different area or the conflict zone. In general, those who just need help in socializing in new surroundings. We attended different workshops on psychology, education, first aid, even self-defence.”

After the training, volunteers were paired with a local teenager. They attended team-building workshops together and sometimes went to cafes or the cinema.

“Our idea was to have teenagers work with their peers, because it’s easier to share your problems with someone your own age,” says Ivan. “The project is over now, but I see that they are continuing to spend time together. That means they’ve become real friends.” 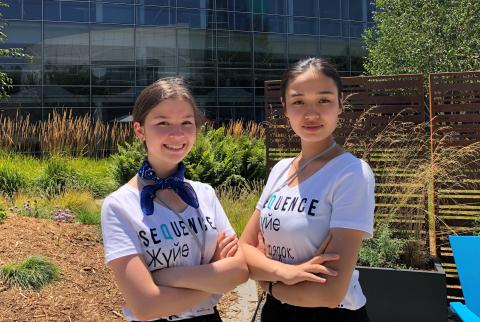 A dream come true: the tale of the teenage startup 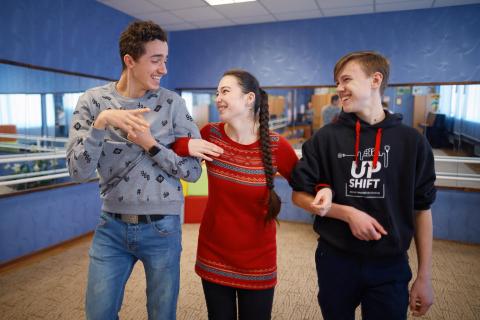 Education, training and skills for a brighter future 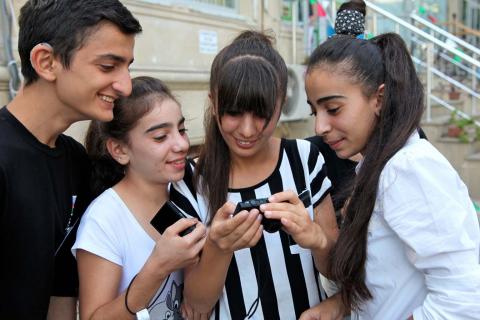 Read how we support adolescent development and participation in the region. 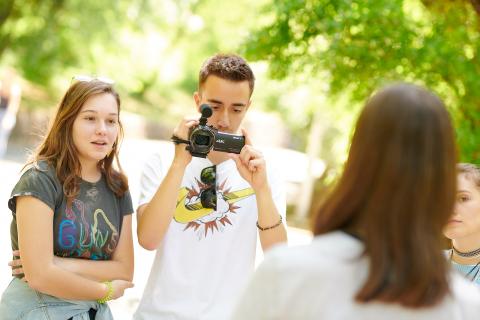 TV news for children, by children

UNICEF volunteer reporters produce their own news programme in Montenegro