Children shouldn’t be able to distinguish different types of artillery, yet many of those living near the contact line in eastern Ukraine – the line that divides government and non-government controlled areas and where fighting is most severe – have now learned. After more than 3 years of volatile conflict, the stretch of land along the contact line in eastern Ukraine is now one of the most landmine contaminated places on earth. Thousands of rounds of unexploded ordnance are now littered in fields and civilian areas, and there is regular shelling near homes and next to schools.

Photographer Ashley Gilbertson and UNICEF went to meet these children living in constant danger of injury and death.

Aleksey, 14, lost two fingers and a thumb when a weapon exploded in his hand

As we were walking to the pond there was a convoy of military passing and some… thing… fell off one of the cars. I wasn’t sure what that thing was, it looked like it could be a pen. I picked it up and it exploded in my hands. My first feeling was shock and pain. I looked down and saw the fingers were hanging from my hand.

Aleksey lives in Vozdvyzhenovka, eastern Ukraine. The family heat their home using firewood they chop outside, sometimes in temperatures as low as -20 degrees Celsius. Military positions at the end of the street regularly exchange fire with the deep thuds of outgoing and incoming shells heard throughout the day.

My whole life has changed. I can’t do everything I could do before without my fingers, but I’m getting used to it. I’m learning how to write with my left hand, it’s not very good yet, but I’m trying. Sometimes I’m getting upset up until the moment when I break into tears.

In addition to the challenges caused by conflict, both Aleksey’s parents are unemployed, and alcoholics. His father worked in a coal mine until a ceiling collapsed on him in 1996, breaking his back. With almost no money for food, the children fish in ponds and use traps and dogs to catch rabbits to eat.

Vadim, 9, was hit by a shell and run over by a military vehicle

When Vadim was six he was injured by shelling.

I was with my brother standing in the yard. We heard something flying towards us, and then I felt this pain in my shoulder. My younger brother was behind a tree. That saved him.

The following year Vadim was standing by the road with his bicycle when an armoured personnel carrier hit him, breaking his leg and crushing his skull. His family waited for an hour for an ambulance to the hospital where his mother was told he would need a metal plate in his skull. She could not afford it, and the family didn’t receive any other compensation, other than a new bicycle.

Vadim points to damage on his old home, in a building known by locals as the “colouring book”, in Avdiivka, eastern Ukraine.

Vadim says he doesn’t know why the two sides are fighting, all he really knows is there are men in uniform everywhere, and that he’s afraid of them. Vadim has almost no memory of his childhood before the war began.

I remember the summer and the warm summer rain. I remember when I was running with my friends in the rain.

Misha, 9, had shrapnel removed from his brain

In August 2016, Misha was walking to his house when a shell dropped nearby. “I didn't feel anything at that moment. I was just stunned” Misha says. But a piece of shrapnel had hit him in his head, embedding in his brain.

His mother did her best to clean the wound, but, because of the ongoing fighting was unable to get him to a hospital until the next morning. Doctors tried to remove the shrapnel, but with no anaesthetic, Misha screamed in agony. He was transferred to a larger hospital in Zaporizhzhia where he was operated on and had a metal plate replace a part of his skull.

Misha with his mother, Liubov on a bicycle outside their home in Mariinka, eastern Ukraine.

Misha and his mother live in the “grey zone” in Mariinka, eastern Ukraine, a town situated directly on the contact line which divides government and non-government controlled areas and where fighting is most intense. An estimated 100,000 civilians live in the grey zone, many of whom, including Misha, have no access to water, gas, electricity or heat. These people also bear the brunt of the fighting.

It's not that scary here. I'm already used to shootings. They do it at night. When the shelling starts I hide under the blanket, but I don't think the blanket will protect me.

Anya, 13, has had her house destroyed by shelling, twice

Anya plays in the yard with her seven year old sister Margarita (out of frame) at their grandmother’s house where the girls now live after their home was twice destroyed by shelling in the town of Avdiivka, eastern Ukraine.

Anya and her sisters are only allowed to play outside in their own yard, and even there, it is not safe. There is always the threat of unexploded ordnance lying around, and last month, a bullet passed close by and hit a wall while the family was outside.

One time, I was on my way to the shop, and something whistled, but I just quickly went to the shop. And then I came back, and there was a bullet where I was passing. My dad and I picked it up, and it was fresh. Now I don’t feel anything, I used to be afraid, but now I don’t care.

Anya looks out of the window of her old, now destroyed home in the town of Avdiivka, eastern Ukraine. Anya and her family live in the house of a relative now because their home was twice hit by shelling.

Before I used to be afraid a lot. During heavy shelling, we used to hide in the cellar. And then we started hiding in the kitchen. And there is no glass in the kitchen, so we used to sit on the bed and stay there. And now I don’t care at all. I am not afraid anymore.

The first time, in 2016, a shell destroyed the roof of the family’s house, which was later repaired by emergency services. In July 2017, before Anya, her mother and sisters could move back in, the house was shelled again, this time completely destroying the house. The barrage killed her grandmother who had already moved in.

Sasha, 12, had his ankle shattered by a bullet

In August 2016 Sasha was riding his bicycle close to home when a bullet shattered his ankle.

They were shooting somewhere at the distance. But I didn’t hear the bullet fly or anything.  Before this happened, I wanted to become a famous football player.

Sasha (foreground left) walks to school with two friends. Because of the fighting and no heating, the local school only operates three times a week, with classes cut short to 20 minute sessions. At school, there used to be 20 students in his class, but that number has dwindled to ten as families have fled in search of safety.

Before he got hit, Sasha was like a proper child. Now he seems like a grown up. He’s more aware, more cautious. And he can tell from the sounds what type of weapon is working; whether it’s automatic rifle fire or artillery. 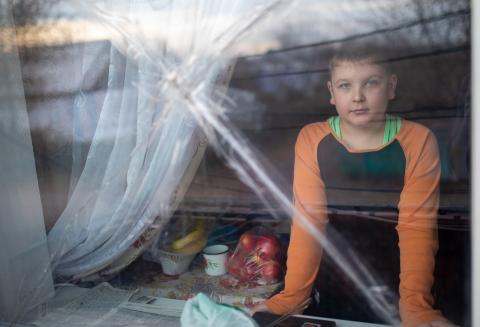 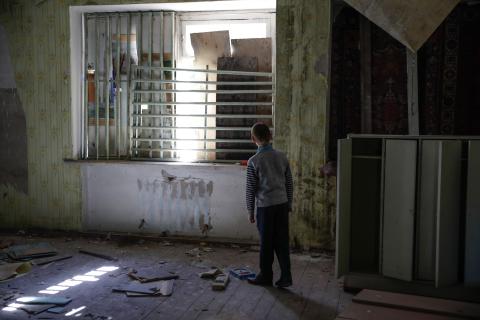 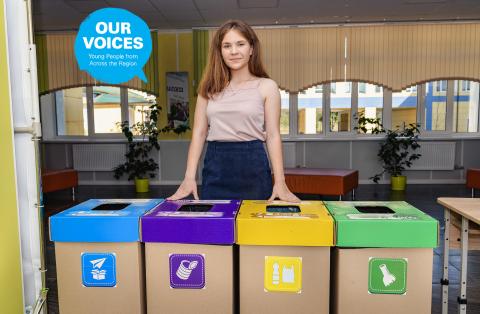 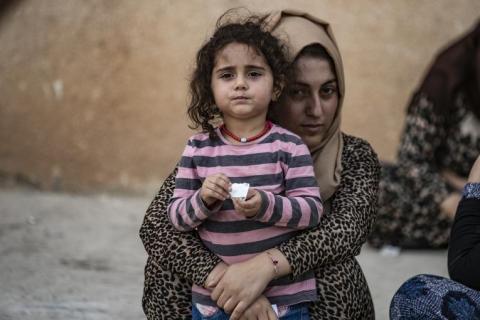