With funding from the EU ‘Refugee and Migrant Child-Health Initiative’, UNICEF and its partners are supporting holistic paediatric health services for refugee and migrant children in Bosnia and Herzegovina

With funding from the European Union (EU) ‘Refugee and Migrant (RM) Child-Health Initiative’, UNICEF and its partners are supporting holistic paediatric health services for refugee and migrant children in Bosnia and Herzegovina. This initiative is particularly important for children like Adil, who have made their long journeys alone.

Fifteen-year old Adil has had too much responsibility and has faced too many risks in his short life.

Five years ago, Adil was already well aware of the dangers lurking in his small village in Afghanistan. His family lived in an area ruled by the Taliban regime and, as the oldest boy in his family, it was only a matter of time before he would be recruited. Meanwhile, his father became less able to earn a living and the family struggled to make ends meet.

“My father became older and he could not take care of my family anymore,” he says. “I decided to take it upon myself. By staying in Afghanistan, I would not be able to help them.’’

And so, a 10-year-old boy embarked all alone on a 6,000-kilometre journey to find a safer and more secure future Europe.

Children who travel without their parents or who become separated from their family are exposed to serious risks to their physical safety and mental well-being. Many who experienced traumatizing events that forced them from their own countries, find that they face more dangers during their journey and when they arrive in Europe.

“I started my journey with a group of people, all of whom were significantly older than me,” says Adil. “They were forcing me to go back because I was too young, but I made up my mind that I am not giving up. I found another group and continued my journey with them.’’

“A person who does not do harm to others will not experience anything bad from other people.’’

Adil’s first stop on his way to Europe was Turkey. He found a job in a clothing factory and worked so hard that, at just 11 years old, he was ‘promoted’ to train new arrivals. Adil was the youngest child at the factory and worked alongside other undocumented children and women and migrant workers.

“The factory was a place for whoever needed to earn money fast, without documents or any other paperwork. I was happy to have a job because I could support my family in Afghanistan.’’

Adil stayed in Turkey for more than three years, but decided to leave when he heard stories about people being deported. From Turkey, he went to Bulgaria and then to Serbia, where he was caught by the police and deported to North Macedonia. He says that this was the most difficult time during his journey. During his time in Serbia, he was placed in a reception facility for adult, single men for eight months, staying with an adult friend he had met in Turkey.

Children like Adil who live ‘under the radar’ in reception facilities for adult men face serious risks of abuse and exploitation. That is why it is so important to identify children in these facilities as quickly as possible, remove them from danger, and find them safe and appropriate accommodation.

Adil thinks that he has been relatively fortunate. When asked about his experiences since leaving Serbia and arriving in Bosnia and Herzegovina, he only focuses on the positive.

“When I first arrived in Bosnia and Herzegovina, I stayed in a small place near Tuzla. I slept in a local church for seven days and one local lady provided food, clothes and anything else I needed. She said that I was like her son.”

Perhaps this is why Adil still has a touching faith in other people: “A person who does not do harm to others will not experience anything bad from other people.’’

Adil was first identified in Una-Sana Canton in August 2020 by a UNICEF team during regular field monitoring. He now lives in Temporary Reception Centre (TRC) Sedra with 60 other unaccompanied boys from Afghanistan, Pakistan, Egypt, and Nepal. Here, UNICEF’s partners on the ground provide the children with care and support around the clock.

Adil wants to go to Germany where he has an uncle. While he is keen to start working as soon as possible to support his family back home, he also understands the importance of education. Adil will soon join the 143 refugee and migrant children who are now enrolled in one of the five local schools in Bihac and Cazin, a project supported by UNICEF in collaboration with the Ministry of Education.

Before their enrolment, children must have had a medical examination. Fortunately, Adil and the other children have had regular check-ups at the paediatric unit in TRC Sedra, with support from the ‘RM Child-Health’ initiative, which aims to provide paediatric care for every refugee and migrant child in Bosnia and Herzegovina. The unit is also the hub for regular workshops on health, child protection and mental and psychosocial health organized by UNICEF and its partners.

Adil and the other unaccompanied and separated children in TRC Sedra have attended two such workshops on the misuse of medicines and self-medication, organized by UNICEF in cooperation with the Danish Refugee Council (DRC) and Save the Children International (SCI), and on the prevention of alcohol and drug abuse, organized in cooperation with DRC, SCI, Médecins du Monde (MDM) and the United Nations Population Fund (UNFPA).

As for hobbies and interests, Adil confesses that he doesn’t have any.

“I skipped that part during my growing up. I had to focus on my journey and work and now I am just not interested in hobbies anymore, but I want to be a tailor. That is something I am good at and that is something I like doing.’’

He talks to his family in Afghanistan every day, but never via a video call.

“I can’t stand seeing my parents cry,” he says sadly. “And they cry every time because I have grown up and changed so much since the last time they saw me.”

Children like Adil – on the move, homeless, and often distressed – are particularly vulnerable. It is the task of UNICEF and its implementing partners to support their well-being and resilience by ensuring that they have safe and protective accommodation, and access to the vital services they need, such as 24/7 protection, education, and child-friendly spaces, as well as paediatric, mental health and psychosocial support services.

This story is part of the Project Strengthening Refugee and Migrant Children’s Health Status in Southern and South Eastern Europe, co-funded by the Health Programme of the European Union (the ‘RM Child-Health’ initiative). Its contents represent the views of the author only and are her sole responsibility; it cannot be considered to reflect the views of the European Commission and/or the Consumers, Health, Agriculture and Food Executive Agency or any other body of the European Union. The European Commission and the Agency do not accept any responsibility for use that may be made of the information it contains. 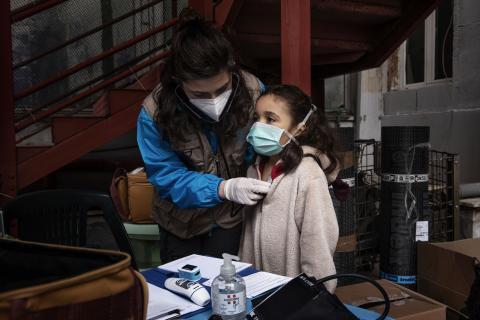 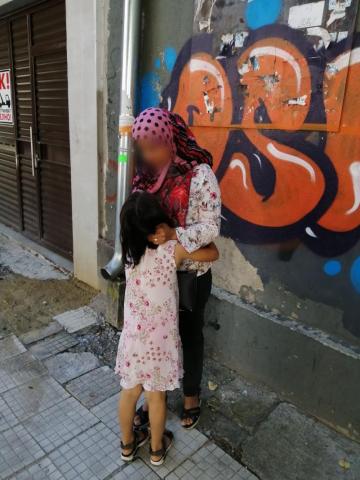 When sores turn into wounds on a refugee’s long road 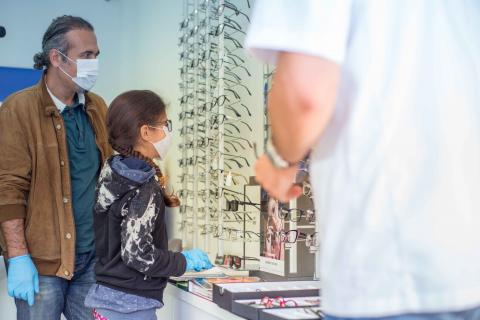