Taking the fight against malnutrition into rural communities

Health outreach activities identify children suffering from malnutrition and ensure the right support is put in place to help them recover.

Ratanakiri, January 2021, "I've spent 20 years trying to help people in my community understand more about health," said Romcham Hen, gesturing around his wooded community in a distant corner of Cambodia’s remote Ratanakiri Province. The 48-year-old Village Health Support Group volunteer looked tired but happy after a busy morning managing an integrated health outreach event. "When I started, most people here didn't really understand much about their health. I remember that a lot of children used to die, especially the littlest ones under five. But last year, there wasn't a single death here, and that is a tremendous change."

Mr. Hen had shown his commitment all morning, ensuring that almost all local children, mothers, and pregnant women attended the health outreach session in the centre of the village, where they received healthcare advice, education on COVID-19, vaccinations, and nutrition screening and counselling. The session is a core element of UNICEF’s Integrated Early Childhood Development (IECD) programme which is largely funded and supported by the Australian National Committee for UNICEF. Mr. Hen acted as advocate, organiser and interpreter all morning, making sure that the local healthcare staff's guidance was translated into the locally spoken minority language, Jarai.

“It’s important that the healthcare staff come right into the community,” Mr. Hen said. “A lot of people here are poor and don’t have any transport. They wouldn’t travel the 15 kilometres to the health centre, but they will take part if the health centre team comes to the village. There are a thousand families, so that's a lot of children we can help. Eating well, drinking well, and living well, that's what we are trying to teach them."

Sev Tet, a 30-year-old mother of three, attended the health outreach session and said she had learnt a lot, particularly about COVID-19. She said that everyone in the village had heard about the virus and worried about it, even closing the village to newcomers for part of 2020. She said she felt safer now she had more information on the virus, “but I have to admit, I still have fears.”

Mrs. Tet said that the other part of the morning she had found most useful had been advice on feeding children, an ongoing challenge for her and other mothers. “We’re all facing troubles here,” she said. “There’s not enough income and that means there isn’t enough food. It can be a struggle to get fish or meat. Sometimes the only times we can all get protein are when there’s a religious event and a pig is killed as part of the festivities.”

Lonh Leak was one of the healthcare staff who helped Mrs. Tet that morning and provided her with nutrition advice. “Sometimes the problem is that people don’t have money and sometimes the problem is education,” he explained later, back in the local health centre. People don’t really understand how nutrition works, especially for children. They don’t know all the different micronutrients and vitamins a young child needs. Often, they will just try and give a young child the exact same food as an adult, not knowing that they might need more vegetables, for example."

Mr Lonh’s major duty on the day was managing the screening of pre-school children, which involved measuring their height, weight and arms to look for signs of malnourishment and its manifestations in stunting and wasting. "It's important we come out here and do this properly," Mr Lonh said. “You can’t evaluate with your eyes alone, you really need to be precise and scientific.”

During that morning’s screening, Mr Lonh was relieved to find that only one child showed signs of malnourishment. Even a few years earlier, he believed that figure would have been much higher. Of course, the child’s mother, 21-year-old Sol Pray, was upset when she learnt that her 2-year-old daughter Solina was malnourished.

“I knew she was a bit small and I was worried about why she wasn’t growing more,” Mrs. Sol later explained, sitting in the nearby home she shares with her parents and siblings. “But when they said she had severe acute malnutrition I was a bit shocked. But I am glad they told me. That means I know what to do now.”

Mr Lonh and his team had carefully explained that although Solina was malnourished, she didn't yet have any additional health complications. With care and better nutrition, she could fully recover, and the expert staff would monitor the situation in follow-up appointments.

Mrs. Pray was provided with a locally produced Ready-to-Use-Therapeutic Food (RUTF) called Nutrix. Nutrix is a fish-based product including vital nutrients, given to children with severe acute malnutrition so they can recover. Nutrix was developed by a private company with technical contribution and support from UNICEF, and is certified by the Ministry of Health. "I'm just happy she is eating it," Mrs. Pray said, finding a smile after an emotionally difficult morning. "I'll make sure we go to the health centre for future appointments, I know how important it is. I just want my daughter to grow up strong.”

The follow-up appointments are indeed essential in monitoring the progress of children with malnutrition, a means of ensuring that they gain weight consistently over a crucial twelve-week period. At nearby Andong Meas Health Centre, we met Ting Tum, the 36-year-old mother of 18-month-old Ting Samnang. They were there for their follow-up appointment, a month after Samnang was diagnosed with acute malnutrition.

"I didn't know he was malnourished," said Mrs. Ting as she fondly played with her little son in a waiting area. "I just thought he was suffering because he had bad diarrhea. But the staff were so helpful and explained everything to me. They even called me up before the appointment, just to make sure I would come and he would get the help he needed."

As instructed, Mrs. Ting had been feeding Samnang bars of Nutrix. "He loves it and eats a lot," she laughed. "I'm also making him some more nutritious meals like porridge with egg, that's some of the advice they gave me. It's really working. It was very hard for me before, when he was sick. He didn't play or even look at people. Me and my husband felt so sad, because we only have one child and we wanted to play with him and show him our love and make him happy, but he was so weak. Now he is stronger and smiling.”

Soon the nurse confirmed her instincts, weighing him and informing her that Samnang had gained almost a kilogram. The whole family smiled with delight after the check-up and Mrs. Ting expressed her relief. “Everything feels much, much better now." 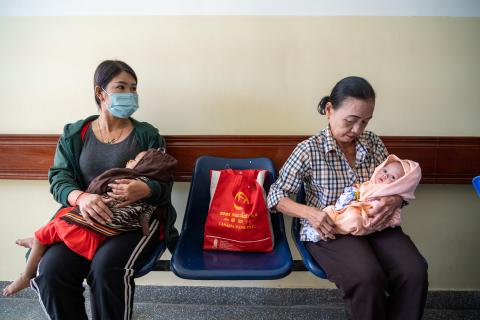 Ending childhood malnutrition, one family at a time

The team at Cambodia's National Pediatric Hospital save children's lives every day with their expert, compassionate care. 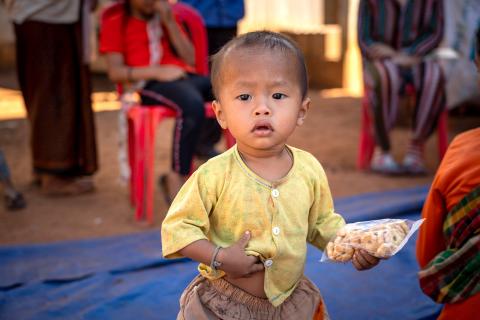 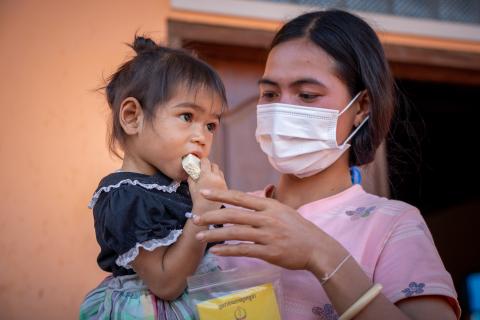 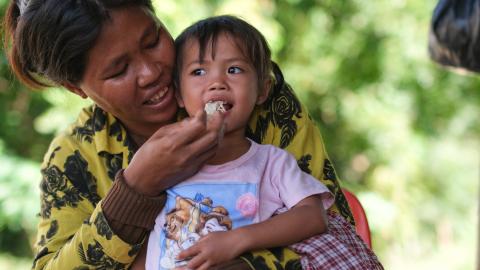 Opinion piece: school reopening are an opportunity to improve nutrition for children