UNICEF worked with communities across Cambodia to spread the message that handwashing with soap is one of the most effective ways to prevent infection from COVID-19, and that UNICEF was delivering almost 250,000 bars of soap to 100,000 families

Kampong Speu, Cambodia, September 2020. Sometimes a message is so important, you'll go to any lengths to get it heard - even if that means strapping a loudspeaker to a tractor, a tuk-tuk, a motorbike, or even a bicycle and then pedaling hard so that the message rings out across Cambodia.

In this case, the message was that handwashing with soap is one of the most effective ways to prevent infection from COVID-19, and that UNICEF was delivering almost a quarter of a million bars of soap to 100,000 families identified by the Royal Cambodian Government as being in need. Both UNICEF and the Government set a target of completing the distribution by Global Handwashing Day on 15th October, made possible thanks to our partnership with Colgate-Palmolive, and support from donors Danish Aid, the Government of Japan, Irish Aid, UK Aid, and USAID.  The recipient families responded enthusiastically.

"I am a man who did not get a blessing from the Buddha," Mr. Mao Sokhom said to us, ruefully. Mr. Sokhom is a 43-year-old former construction worker in Kampong Speu province. Ever since a tragic accident where he fell from the roof of a house he was working on, he has struggled to earn money and support his five sons. His family was identified as poor by the Government, and were one of the early recipients not just of soap but of simple handwashing facilities provided by UNICEF: an 18 litre plastic bucket made in Cambodia, with a tap to allow handwashing in the absence of plumbing. Mr. Sokhom was happy and relieved to be able to look after his family at this time of crisis, helping prepare them for their return to school.

The soap Mr. Mao Sokhom received was a tiny sliver of the 22 tons of non-branded "Safe Hands" soap donated by Colgate-Palmolive and 20,000 handwashing buckets being delivered across Cambodia in a massive logistical operation reaching from the southern province of Takeo to the north-western tip of Ratanakiri, and reaching Kampong Speu, Svay Rieng, Preah Vihear and Kratie in between.

“We are working closely with the Ministry of Rural Development and sub-national authorities to identify key locations and deliver all the items successfully to the poorest households in danger of being left behind” said Mr OUM Sopharo, WASH Officer with UNICEF in Cambodia. “With so many villages and households to reach, many in very remote locations, it is challenging, but we are determined to finish the job by Global Handwashing Day.”

According to data from the UNICEF and WHO Joint Monitoring Programme for WASH, poor rural households are the most disadvantaged when it comes to hand washing options. Only 43% have a handwashing facility on their premises with soap and water available to practice safe hygiene (www.washdata.org). Even before the specific needs created by COVID-19, the promotion of handwashing has long been crucial to achieving the Royal Government of Cambodia's target that: 'Every person in rural communities has sustained access to safe water supply and sanitation services and lives in a hygienic environment by 2025'. COVID-19 has made meeting this target more urgent, with ‘Hand Hygiene for All’ selected as the theme of a joint UNICEF and WHO call for action launched in June this year, and the theme of this year’s Global Handwashing Day.

As well as arming families in the fight against COVID-19 with soap and handwashing facilities, UNICEF is also working with partners to nudge them towards more regular handwashing with soap. The on-going distribution effort is a chance to continue to amplify hand hygiene messages using the Yey Komru/Khmeng Chhlat (Super Grandma/Smart Kids) creative theme developed by iDE with support from the World Bank Group for the Ministry of Rural Development. “We are also distributing fun storybooks for children, handwashing reminder stickers and posters, and making sure handwashing songs are played on our famous loudspeakers in villages in all six provinces” said Mr. OUM Sopharo. “And we’re reinforcing these messages with broadcasts in Khmer on local radio and social media, aimed at children under five and their caregivers, with translation also in to the indigenous languages of Phanorng, Kroeng, Tumpoun, and Charay.”

Giving communities the tools and knowledge they need to combat COVID-19 is at the core of UNICEF's efforts to help Cambodia build resilience and secure a solid recovery. Active and engaged community champions are one of our most valuable allies in getting correct and useful information to people. They are exceptional individuals like Mrs. Som Sreymom, a female commune leader of 43 who enthusiastically supported our efforts in Kampong Speu. She explained that with the help of our information, she was able to help her community learn about good hygiene, safe distance, and how to protect yourself if a loved one is sick.

One of the villagers she works with has taken up her advice with enthusiasm and proved she is one of our real life Yey Komru (Super Grandmas). "My grandchildren, children, and I always keep practicing handwashing, all the time," said Mrs Mean Laily, 67. That's the kind of response and impact that makes a colossal initiative like this so worthwhile. 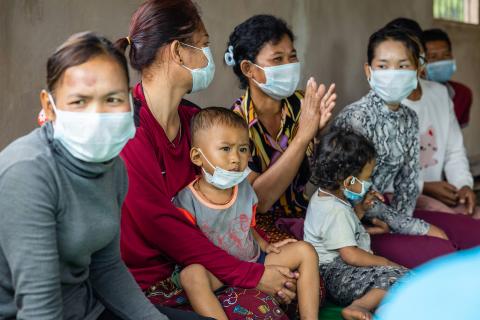 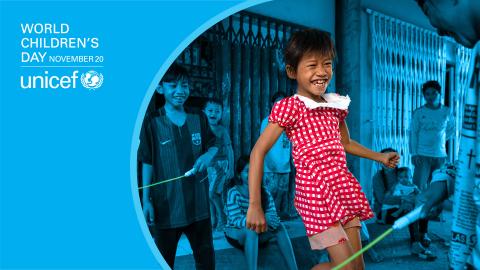 A chance to reimagine Cambodia 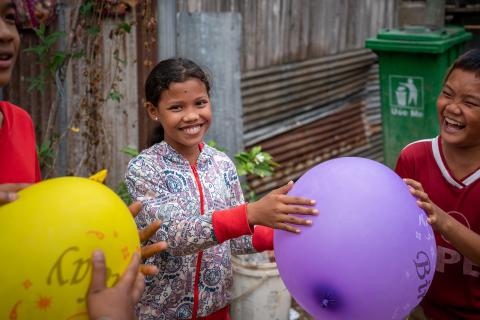 #Reimagine: Meet Sreymoch, a future teacher who will make children happy and smart.