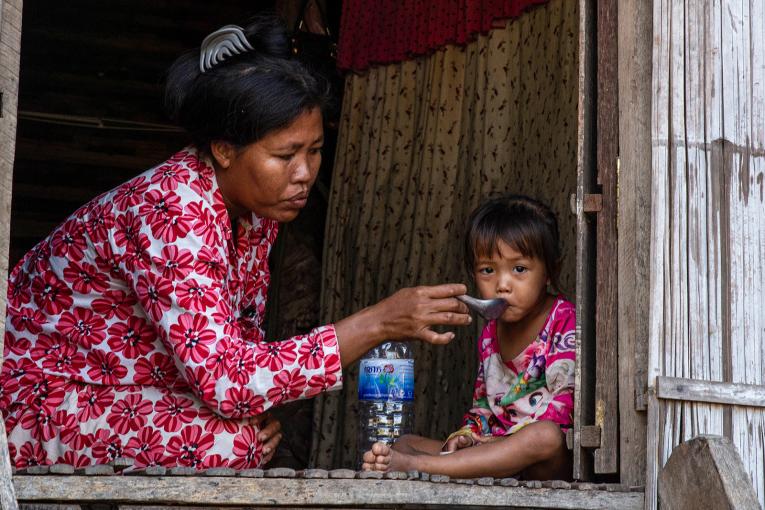 Phnom Penh, 22 September 2021 – Children under the age of 2 are not getting the food or nutrients they need to thrive and grow well, leading to irreversible developmental harm, according to a new report released by UNICEF global office today.

In an analysis of 91 countries, the report finds that only half of children aged 6-23 months are being fed the minimum recommended number of meals a day, while just a third consume the minimum number of food groups they need to thrive. In Cambodia, according to the global report, 40 per cent of children from 6 months to 23 months were getting the minimum number of food groups, but nearly two thirds of those children were from the top quintile. Further analysis of 50 countries with available trend data reveals these poor feeding patterns have persisted throughout the last decade.

As COVID-19 continues to disrupt essential services and drives more families into poverty, the global report finds that the pandemic is affecting how families feed their children. Among many country examples, a Cambodian survey1 conducted by UNICEF, WFP, and other partners from August 2020 to July 2021 found out that 40-50% of respondents reported wage reduction, resulting in increased food-based coping strategies that affect diet quality. Data from July 2021 showed that only 35 per cent of children under 5 years old consumed a minimum acceptable diet.

Children under the age of two are most vulnerable to all forms of malnutrition – stunting, wasting, and micronutrient deficiencies – as a result of poor diets, due to their greater need for essential nutrients per kilogram of body weight than at any other time in life.  Low knowledge of nutrition and aggressive marketing of breastmilk substitutes, contribute to low dietary diversity for children and a reduction in exclusive breastfeeding. Recent wage reductions compound these existing issues.

Globally, UNICEF estimates that more than half of children under the age of 5 with wasting – around 23 million children – are younger than 2 years of age, while the prevalence of stunting increases rapidly between 6 months and two years, as children’s diets fail to keep pace with their growing nutritional needs.  In Cambodia, one in three children is stunted and one in ten is wasted.

According to the global report, children aged 6-23 months living in rural areas or from poorer households are significantly more likely to be fed poor diets compared to their urban or wealthier peers.  The proportion of children fed the minimum number of recommended food groups was twice as high in urban areas (39 per cent) than in rural areas (23 per cent).

“As UN agencies working closely with the Royal Government of Cambodia, we commend the expansion of cash transfer programmes to reduce hardship, particularly for maternal and childhood nutrition. Now we must invest in lasting support for the critical first thousand days of children’s lives. Such investment also contributes to each child’s educational attainments and productivity for the rest of their life. Now more than ever an increase in national budgets is needed for scaling up nutrition programs.” said Foroogh Foyouzat, UNICEF Representative, Cambodia. “Working with our existing partners, we will support accelerated implementation of existing national plans like the 2nd National Strategy for Food Security and Nutrition, National Policy and Action Plan for Early Childhood Care and Development, GAP roadmap and the recent Food Systems Summit roadmap.”

To deliver nutritious, safe, and affordable diets to every child, the global report calls for governments, donors, civil society organizations and development actors to work hand-in-hand to transform food, health and social protection systems by leading key actions, including:

The report calls for governments, the private sector, civil society, development and humanitarian partners, and families to join forces to transform food systems and unlock nutritious, safe and affordable diets for every child. Diverse diets allow children to grow, develop, and learn to their full potential. The upcoming UN Food Systems Summit is an important opportunity to set the stage for global food systems that meet the needs of all children.

Quantitative data on current status, trends and inequities of young children’s diets presented in this report are derived from UNICEF’s global databases, which include only data that are internationally comparable and statistically sound. UNICEF global databases comprise data from 607 nationally representative surveys conducted in 135 countries and territories, representing more than 90 per cent of all children under the age of 2 globally. Data for Cambodia in the press release comes from either the global report or a socio-economic impact study conducted by UNICEF Cambodia, WFP, and supported by ADB. Data on Cambodia in the global report was sourced from the most recent data available in 2020, DHS 2014. 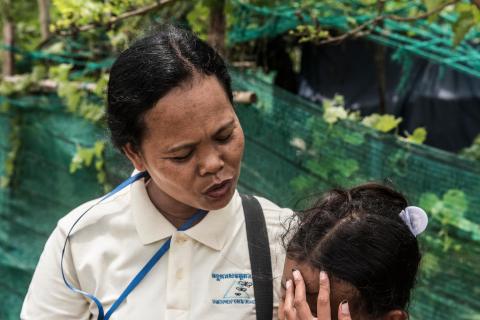 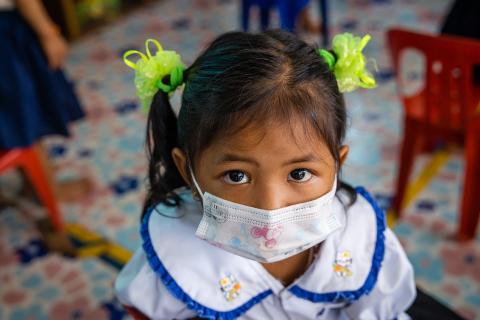 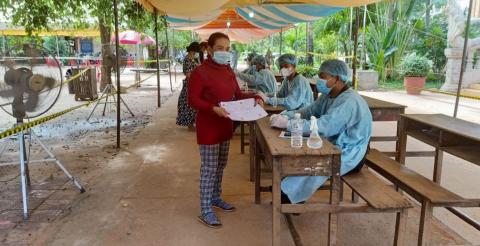