L’ak Commune, Ratanakiri, Cambodia, July 2019 – Located on high grounds, L’ak is one of the hardest to reach communes in the Ratanakiri province, in the far northeastern region of Cambodia. About half of the population here is Kreung, an ethnic community who speaks Kreung.

Its geographic location, lack of close-by supplies, high transportation costs, language barriers and cultural norms cemented through generations, were the hard burdens L’ak had to overcome in order to become an open defecation free (ODF) commune.

But despite the austere circumstances, on June 12, 2018, L’ak became the first open defecation free commune in the province.

The journey started a few years before when UNICEF Cambodia, supported by the United Kingdom’s Department of International Development under Accelerating Sanitation and Water for All initiative (ASWA), and in collaboration with Plan International and the Ministry of Rural Developments, was able to fund a sanitation programme in this commune.

The programme provided technical supports to local government, including the commune council, village focal points and schools. The programme used participatory approaches to promote inclusion, community decision making and local ownership, thus empowering and enabling the community to be its own agent of change. The programs also strengthened the sanitation entrepreneurs’ capacities so they could produce low-cost improved latrines and market to rural, hard to reach households.

Sanitation, always on the commune’s agenda

The key ingredient to L’ak success has been the dedication of the commune’s leadership itself to make L’ak open defecation free.

Kron Chantrea, the commune chief, is a young and energetic woman who champions the sanitation programme in her commune. “The sanitation topic is always on the agenda of the monthly commune council meeting,” she says.

She works hand in hand with her second deputy chief of commune, Bean Yem, to bring an end to open defecation in L’ak. She handles all management, financing, coordination and advocacy aspects of the sanitation programme in her commune while Mr. Yem follows up with the community on daily basis. He rides his motorbike from village to village to pursue families to build latrines and explains to them why latrines are a life-saving investment.

“I meet the villagers two to three times per month, on average five to ten families per day,” says Mr. Yem.

L’ak dedicates a substantial amount of its staff’s time for door-to-door awareness raising while in many communes it is not significantly dedicated.

In some villages in the commune, like Kork, the Village Sanitation Committee has established a set of rules to end open defecation and enforce the use of latrines. Here, the village focal point and a member of the committee, can give a fine of US $ 12.5 to anyone who is defecating in the open space, which is a large amount for the Ratanakiri households. Then, the village focal point explains to offenders how their practice can affect the health of the whole village. Occasionally, they are brought to visit households with latrines so they can see how comfortable it is to use latrines compared to open defecation.

From school to home

Educating children and students on using latrines was a key component of the sanitation programme UNICEF Cambodia has been implementing.

Plan International, under the programme cooperation with UNICEF on WASH in School, provided a sanitation and hygiene training for school directors so they could teach their students about the importance of using latrines and handwashing.

There was a domino effect - once students started to use latrines in schools, they became strong advocates and urged their families to build latrines at home. Chromourn Sany, a 4th Grade student at L’ak Pi primary school is one of them.

“I explained to my brothers and sisters why washing hands is good for you. Some of them do wash their hands after using the toilet and before eating, but some don’t. I keep explaining to them again and again, for the health of our family,” says Sany proudly. 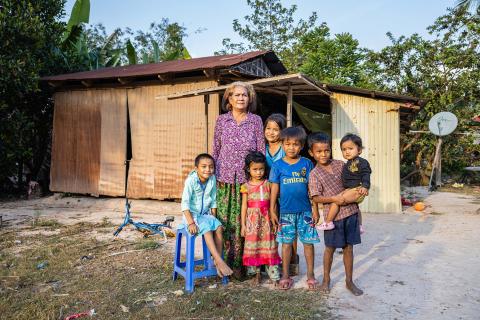