Unique music orchestra from Bugojno open for all

“If we did not believe that we could win, we would not have applied in the first place. I was sure that they would call out our name”, Tara remembers the moment when her team was declared one of the best at the 4th UPSHIFT Workshop.

Tara, Arijan, Amel, Adin and Ena from Bugojno wanted to solve a problem. “In our town, there is no musical workshop or orchestra which anyone could join”, and their project was one of the 144 youth projects from 13 municipalities of Central Bosnia Canton which applied.

The UPSHIFT methodology was developed by the UNICEF Office of Innovation to teach young people about skills and resources necessary for the identification of problems in local communities and devising solutions for them.

UPSHIFT is a program for teams of three to five young people aged 13 to 19, who have noticed a problem in their community, and they wish to contribute to a solution. The program offers an intense workshop for ten selected teams where they learn from super mentors and coaches how to take all the necessary steps from identifying a problem to creating an innovative solution.

At the end of the workshop, the teams present their ideas to a jury which selects five teams whose solutions have been recognized as the best – because they are easiest to implement, they will contribute to the improvement of quality of life for a great number of people, they are realistic, they provide a long-term solution to a problem – and they are awarded BAM 3,000 each to implement their idea.

In the next three months, the selected five teams receive the help of the UPSHIFT team and mentors with the realization of their solution to make sure that their solutions are implemented in a high-quality manner, which desired effects achieved.

Members of the team from Bugojno have completed or there are attending the Primary Music School in this town, and they talked for a long time with their teacher Advan Bukva about the idea of the unique music orchestra open for, seeking ways to turn this idea into reality. The invitation to the UPSHIFT workshop hosted by the organization “Genesis Project” from Banja Luka in partnership with UNICEF Bosnia and Herzegovina and with the financial support of the Kingdom of Sweden seemed like a ticket to the implementation of their idea.

We attend one of their rehearsals in a classroom of the Primary Music School in Bugojno where it all started:

“Our idea is the unique music orchestra in Bugojno which anyone can join if they want to learn to play an instrument, sing and hang out with us. We came up with the idea together with our teacher, we asked him what we should include in our plan, we discussed our options and what we need to implement it. We worked hard in the past too, but people didn’t know much about it, nobody had ever heard about us, and now, thanks to the equipment we got, we can show our work to a wider audience and reach potential new members of our orchestra who have talent and desire, but never had an opportunity to learn to play an instrument and sing”, says Ena, who plays the guitar in the orchestra.

Amel plays the accordion and says that he liked the idea from the beginning, and he gladly joined the team, they worked hard in the workshops, he says that it was hard sometimes, but in the end, all the effort paid off. Tara does not hide her enthusiasm over the fact that she will have the opportunity to share her knowledge and passion for music with others:

“We want to share our knowledge with everyone who wants that. We like to spread music and teach other people what music is. I want other children to get a chance to understand what it's like when you learn to play something and when you can show in that way how you feel at that moment”, she tells us. In addition to the piano, she also plays the guitar, and recently, she says, she has learned to play the drums as well.

Teacher Adi Bauk, who has been working with great enthusiasm on the ‘musical literacy’ of children in Bugojno for years, says he is happy to see young people who not only want to learn but are also willing to selflessly share their knowledge with others.

He explained that for a start, they are planning an open presentation on music in general and the positive impact of music on people, while in the second part of the workshop, they will move on to learning to play instruments and sing. Together, they will choose a song to rehearse, and then assign a task for each participant and an instrument to learn to play with one of them. The result would be for them to play the song they learned together.

Ena adds that many of them have previously volunteered for the organization “Leptir” (Butterfly) through the choir and the local ensemble and worked with children with disabilities:

"We want to include them in our process too, and we will do our best to realize that so that they can come to us at least once and socialize because all children love music and music is also therapy in a way. They are interested in everything about music, so they are already a part of the project in some way”.

The Director of the “Genesis Project” Dijana Pejić and project assistant Nikolina Garača also attend the rehearsal, and they do not hide their amazement by what they see and hear.

"The problem that young people see in this community is that children want to play instruments, but they don't have the means, they don’t have a place and they don’t have anyone to teach them, they don't have the opportunity or access to music education. But some are a little bit older, who have the knowledge, skill, and time, but they lack the equipment to create a great story. At first, they did not even know what that story would look like, and that is where UPSHIFT came at the right time, with mentor Amar, who is an artistic soul and who helped them prepare even better”, says Nikolina.

The orchestra's repertoire includes works and performances such as "Final Countdown" by "Europe", or "Bad" by Michael Jackson. Dijana was almost brought to tears by the spontaneous instrumental performance of the hit "Despacito" performed by the team when Tara “hit” the introductory theme on the piano, and when she was joined by Ena, Adi and Arijan with guitars, teacher Advan grabbed a guitar too, and everything was “spiced up” by Amel with a phenomenal accordion solo.

“Great! I cannot wait to come again and see this team in an expanded lineup and with new members! I hope that this energetic team of young people will successfully realize what they envisioned”, says Dijana, emphasizing the great response which selected the 10 finalists for participation in the workshop difficult, and which made it even more difficult to select the five best because many great projects applied.

Young people of Busovača against prejudice, stereotypes, and

“We have good predispositions to become a happy community, we need more interest, self-confidence and youth activism.” 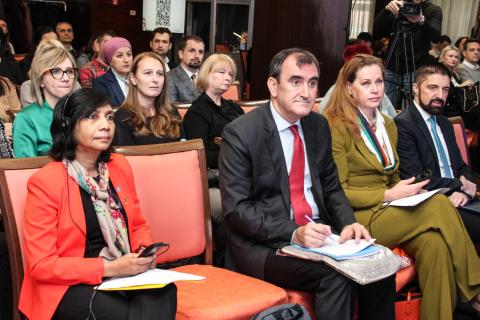 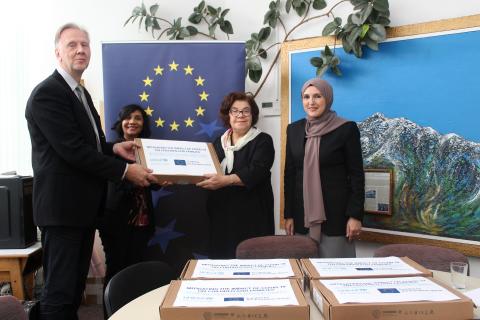