European dream of future chefs and hairdressers from Ušivak

Teenagers from Ušivak were given the opportunity to acquire hairdressing and cooking skills through the Vocational Training Programme for Migrant and Refugee Children.

Brothers Said* and Rachid* from Algeria in the temporary reception centre Ušivak near Sarajevo are dreaming of coming to Italy one day, where they plan to open their own hair salon. Said is older, and at under the age of eighteen, in his native Algeria, and during a long journey, he managed to "gather" five years of experience in hairdressing, and he also passes the craft on to his younger brother. They got the opportunity to improve their hairdressing skills and get a certificate that will later help them in their job search through the Vocational Training Programme for Migrant and Refugee Children, which is implemented by the PI Secondary School Centre Hadžići with the support of UNICEF and World Vision Bosnia and Herzegovina.

"I already have experience, but this programme has helped me to improve what I know even more, to transfer knowledge to others, and the certificate we will receive after the training will help me get a job. I would like to open a hair salon in Italy with my brother one day", says Said, as his brother prepares to have his highlights made.

"I used to learn the craft from Said, and he helped me a lot in these workshops where I learned some more things from the teacher," Rachid tells us as he waits in a hairdressing chair for his colleague Munir* from Morocco to make his highlights.

"During the last class he did my hair and highlights, now I do it for him," explains Munir, who has been on the road since last year and has been in Bosnia and Herzegovina for about seven months. So far, he has gone for the "game" - an attempt to cross the border, 3-4 times. His wish is to come to Italy, and he says he would do any job.

"I have my parents left in Morocco, I am on the road with friends. I set out to secure a better life," says Munir, who has been in Ušivak for seven months. Before making highlights on Rachid's hair, he helped Omar* from Gambia untangle the dreadlocks.

"I like it here at the workshop. I am from Gambia, I want a better life, I like to play football and I hope to live in Germany", he tells us as he prepares for the continuation of the class, while a small hairdressing workshop is getting livelier as the students in hairdressing aprons get new assignments.

"What's up, teacher ?!", is how they upon arrival greet Mediha Topalović, a hairdressing and wig making practice teacher at the PI Secondary School Centre Hadžići, who is full of praise and proudly talks about her new students:

"The children are great and it is really wonderful to work with them, I have no words. They are hardworking, they want to learn, there are a few who are already excellent and can work as hairdressers, there are those who with the acquired level of knowledge and skills can work as auxiliary workers in a hair salon and continue to improve, but in any case each of them is qualified for work and possibly further training through practice", she explains.

It is lively in the cooking class too, where another group of students in chef's uniforms and with chef's hats with practical teacher Maid Mujić prepares a dessert - hurmašice, and a festive lunch and service for the certificate award ceremony, which they will receive together with friends from the hairdressing group after the successful completion of the programme during which each of them went through 80 hours of daily training.

"I am more than satisfied, the boys are really working hard and want to learn as much as possible. We trained them for the basics as much as we could for this cycle, so that later wherever they go they have the skills and knowledge that can make it easier for them to get a job in any serious hotel or restaurant. The final exam here will be the preparation of a festive lunch and serving for the certification ceremony, for which they are seriously preparing," says‘chef’Maid, while the boys prepare the ingredients for the hurmašice.

Samir* and Hasan* are from Pakistan, and they hope that after many years on the road, their dream of finding a better life in one of the European countries, preferably France, where, they say, they know how to appreciate good cuisine, will come true. Samir says he has learned a lot of new things in the workshops, while Hasan adds that he has improved his previously acquired knowledge:

"I have been on the road since 2019, and while I was in Greece, several of us lived in one house, I was in charge of cooking and I was doing well. When I come to Europe, I hope that this knowledge and certificate will enable me to get a job", Samir is optimistic, while Ahmed* from Syria is only dissatisfied with the duration of the training programme:

"It's great, but I would like it to last longer, so that we can learn more and have even more practice so that we can be better at work. I would also like to have the opportunity to spend more time with my peers from this school".

UNICEF and World Vision Bosnia and Herzegovina support the Ministry of Education of the Sarajevo Canton in providing access to a secondary vocational training programme for migrant and refugee children. The training programmes are implemented by the PI Secondary School Centre Hadžići, and UNICEF is supporting them by providing cultural mediators who support teachers and children during classes.

Muris Ajkunić from World Vision, one of those who accompany the boys attending the training programme every day, says that some of them have already expressed a desire to attend training for another occupation in the next cycle - those who now go to the hairdressing training want to go to cooking courses and vice versa, and some would even like to repeat and reinforce what they have learned from the same occupation. Younger children already attend primary school where they have organized transportation, and for unaccompanied boys of this age, who have numerous facilities in the camp, such as Akelius English language course or various workshops in the corner for non-formal education, this was the first such activity to be held outside the camp.

"For them, this means going out, hanging out, music, fun ...", he tells us as we ride with the boys on the school bus, which is very lively, and recent world music hits are "blasting" from the speakers.

"The feedback we received from them after the first days of the programme was very positive, they like to go to school, and even waking up a little earlier than they were used to did not shake them, so after the first five days of school, when the weekend came, they asked why they were not going", says Muris Ajkunić.

In addition to this programme, UNICEF also assists in the procurement of school supplies and provides additional support in learning through daily non-formal education in the reception centre Ušivak, while IOM Bosnia and Herzegovina supports the transportation of children to school.

* Names have been changed for the purpose of protecting the identity of the protagonists. 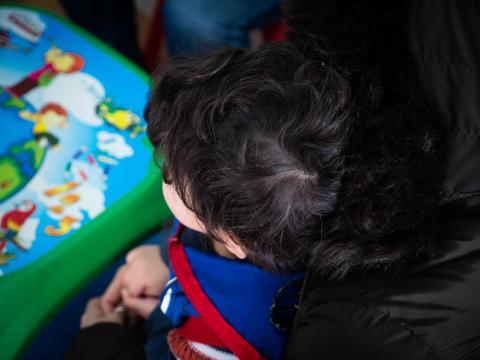 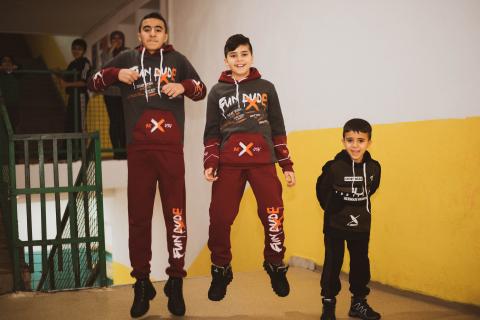 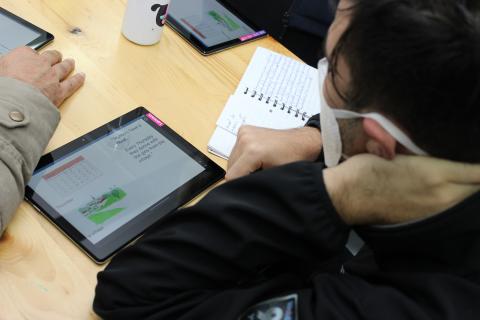 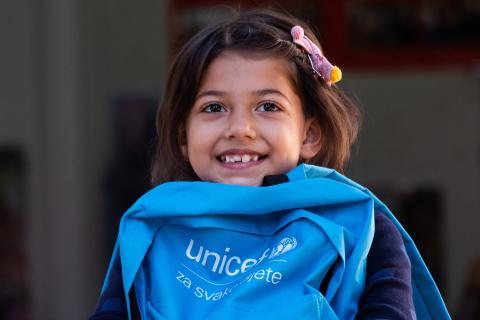 ASAL'S FIRST DAY AT SCHOOL - FOR EVERY CHILD: EDUCATION

Sixty boys and girls from the temporary reception centre for refugees and migrants enrol in formal education in Sarajevo.