Ngawang Zangphel is a simple and ordinary boy who has walked the extra mile to reach where he is today. From being a modest youth volunteer at Phuentsholing Youth Center, he has now become a Junior Software Engineer at SELISE Digital Platforms under Thimphu Tech Park. This extraordinary journey of his life bears testimony to the fact that one can reap a lot of benefits from being actively participating in various youth-enrichment programs provided through Youth Centers and Youth Friendly Integrated Service Centers.

When I first met Zangphel during a youth program at Phuentsholing Youth Center in 2018, he had just joined the Center as a youth volunteer. Zangphel completed Class 12 from Phuentsholing High School.

Since Zangphel’s father worked as a RBP personnel, they lived in the RBP Colony located close by to the Youth Center making it easier from him to visit the Youth Center regularly since 2012. It was only from 2018 that he became a regular and committed volunteer.

Shy and a little reticent, he lacked confidence. He tried to look for a job and even requested the Phuentsholing Youth Center to employ him at the Youth Center itself. He could not volunteer forever as it did not give him any payment. The Youth Center in consultation with the Thromde Office managed to get him a temporary job as a parking fee collector.

During the summer of 2019, the Division with support from the UNICEF Bhutan Office planned to start a codling & programming using Pi-Top V3 in the 4 Youth Friendly Integrated Service Centers (YFISCs) of Phuentsholing, Thimphu, Gelephu and Samdrup Jongkhar. Since he was already a dedicated volunteer, he was selected to be part of the group being trained as a Training of Trainers at the FAB Lab, Thimphu.

In hindsight, this was the golden opportunity or the gateway for his interest, aptitude and competence. He took a keen interest and during the training, he started to lead his group. It was amazing. Still, I did not think his interest in the program would last more than a year. However, Zangphel proved me wrong.

We were fortunate to receive Pi-Tops and computer sets from UNICEF to implement the coding & programming using Pi-Top in the 4 YFISCs. Therefore, after the training of trainers, Zangphel on his return to Phuentsholing and YFISC immersed himself completely into the world of technology, programming and coding. He had found his passion and calling. In his own words, “Pi-Top using Python and simple electronics to create various and amazing projects blew and inspired my mind.”

In 2020, he automatically got included in the training that we conducted in partnership with FABLab with support from UNICEF on Pi-Top Version 4 & 3D Designing & Printing.

He soon became the focal trainer to teach other youth at the Youth Center on the Pi-Top & 3 D Designing & Printing. He became so good that when we conducted the orientation on Pi-Top, coding and programming at Khuruthang Youth Center, Punakha, we invited Zangphel from Phuentsholing to facilitate.

By mid of 2021, Zangphel’s father was transferred to Thimphu which marked and strengthened Zangphel’s journey further into technology. He wanted a job at the FAB Lab; seeing his interest and as a devoted volunteer, I requested FAB Lab but they had no funds to employ him. However, seeing his interest, he got trained in Graphic Designing at FAB Lab.

Zangphel then enrolled in the 6 month’s course on ICT & Online Freelancing at Rigsum Institute dashing the hopes of Gelephu Youth Friendly Integrated Center of having him as their facilitator in the programming and coding sessions that we had asked them to implement. Nevertheless, we requested him to help out at the Changjiji Youth Center, Thimphu and Thimphu Youth Friendly Integrated Center attached to our Division. Being a true volunteer, he agreed, hence during weekends and after his training for the day was over, he would visit and guide other adolescents and youth.

On completion of his course, a job vacancy at SELISE Digital Platforms based at Thimphu Tech Park caught his attention. He applied and got selected.

This year, the Ministry received support from UNICEF to start the Adolescent Skills and Employability Program in the schools and the Youth Centers. A bootcamp was held here in Thimphu, just a week before Zangphel was to start at his new job and new life. The Youth Center Team with Zangphel as part of the group won second prize for the best pitch-an app to help adolescents and youth on mental health and related issues. Today, this group is working in earnest to make it a reality and Zangphel is leading the app programming.

I am sharing this story of Zangphel to highlight that children, adolescents and young people all have different aptitudes and interests other than ‘academics’ which does not mean, the end of everything for these children and young people and write them off if they do not perform well academically. If various choices, opportunities and platforms are created, I am certain that one of the buttons will click to ignite their interest and passion so that they can surpass in it and maybe make a living out of it.

Today, we just know a handful who are making a livelihood out of their hobby and passion. There must be many out there who can be in a similar league like Chencho Gyelsthen, Pinda Panda and others. They need not get employed outside Bhutan as long as they can be independent and not be a burden on the state.

In addition to making available platforms and choices, it is also critical to instill values of tha-damsti-ley-jumdrey so that they become good human beings and loyal citizens. Volunteering is one example.

Zangphel’s experience is also a stark reminder to our children and young people that they should not give up if they cannot excel in academics. They should explore within themselves to identify their interest and pursue it-seek help, if necessary to chase their dreams.

We wish him every success with prayers that he continues on this journey of achieving his dreams while continuing to help others.

The article first appeared on Sherig Bhutan's Facebook Page and is reproduced with permission from the author. 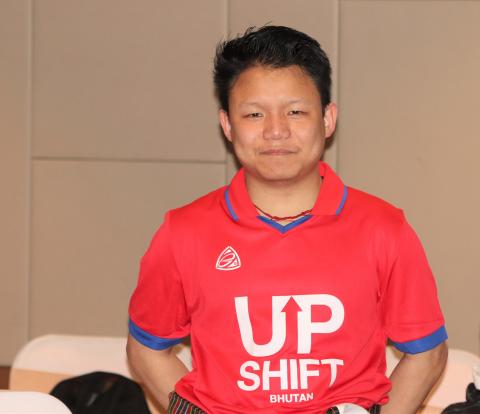 From a youth volunteer to a software engineer