Since August 2018, the Democratic Republic of Congo, a neighbouring country of Rwanda, has been facing a large-scale Ebola epidemic in the eastern provinces of North Kivu and Ituri. Since the outbreak began in August 2018, there have been nearly 3,200 reported Ebola cases and over 2,100 deaths.

Rwanda is one of the most densely populated countries in Africa, bordering the Democratic Republic of the Congo and possessing high-quality transport infrastructure. The country is therefore Priority 1 at high-risk for the rapid spread of Ebola infection.

In 2018, the Government of Rwanda activated Ebola preparedness mechanisms to minimize the risk of importation or cross-border transmission. Although Rwanda remains Ebola-free, 15 districts are at risk of cross-border spread.

In addition, Rwanda is home to some 150,000 refugees. Many refugee children face a range of protection concerns, including violence, abuse, neglect and exploitation. Most refugee-hosting schools lack the adequate infrastructure, teachers and supplies to respond to high influxes. Many teachers recruited and trained by partners are not yet integrated into the national systems. With the coming presidential elections in Burundi scheduled for May 2020, an estimated 30,000 additional people could take refuge in Rwanda by June 2020 and require critical humanitarian assistance.

In line with the National Ebola Plan III and the Inter-Agency Plan, UNICEF will continue to support Ebola preparedness in Rwanda, leading on risk communication, community engagement, community health and water, sanitation and hygiene (WASH).

The response will reach all of Rwanda, with a special focus on the districts bordering Burundi, the Democratic Republic of the Congo and Tanzania. UNICEF will also respond to the humanitarian needs of refugees from Burundi in and outside of camps in Rwanda, working closely with the Government and the United Nations High Commissioner for Refugees (UNHCR) to provide critical services, including health, WASH, child protection and education to children and adolescents.

UNICEF will also support the Government to address the needs of refugees by improving access to national social services for up to 50,000 people. As part of its social policy work, UNICEF will closely monitor resource allocation to the social sectors and continue to advocate for access to essential social services for child survival and the protection of children and women in Rwanda, including refugees.

Humanitarian Action is at the core of UNICEF’s mandate to realize the rights of every child. This edition of Humanitarian Action for Children – UNICEF’s annual humanitarian fundraising appeal – describes the ongoing crises affecting children in Rwanda; the strategies that we are using to respond to these situations; and the donor support that is essential in this response. 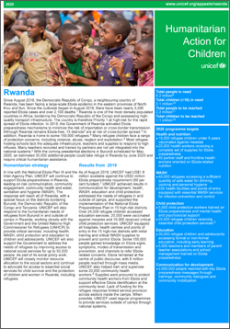 Download the full appeal to find out more about UNICEF’s work and targets for Rwanda.
Download file
(PDF, 2,28 MB)