Refugee and migrant girls and boys in Europe are vulnerable to abuse and exploitation, including gender-based violence, especially when traveling alone, in countries of arrival, transit and destination.

Despite pushback at borders, including at the border between Greece and Turkey in March 2020, and constraints on rescue operations, the influx into Europe is expected to remain high in 2020 and 2021. In 2019, some 123,700 refugees and migrants – over one quarter of them children – arrived in Europe.

With the spike in arrivals on the eastern Mediterranean route, the situation in Bosnia and Herzegovina and in the Greek islands is one of overcrowding, unsafe accommodation and limited access to basic services. In Greece, the fate of 5,500 unaccompanied and separated children triggered calls for their rapid relocation to other European Union Member States. Furthermore, refugee and migrant children continued to be detained under immigration control.

Over 51,200 refugee and migrant children (68 per cent boys, 32 per cent girls), including those who arrived in 2019 and earlier, are living in Greece, Italy and the Balkans. Despite improvements, shifts in resource allocations and limited national response capacities have made it difficult for refugee and migrant children and their families to access basic health, protection and education services. Flaws in the implementation of national health, education, child protection and asylum policies, coupled with growing anti-migrant sentiments, are also undermining the social inclusion of refugees and migrants.

Over 12,900 unaccompanied or separated children, including nearly 1,000 girls, need age- and gender-specific urgent care and protection in Greece, Italy and the Balkans. Multi-sectoral coordination and responses at the local, national and European Union levels need to be prioritized to jointly and sustainably manage migration, and allow children, young people and caregivers to recover from their ordeals and contribute to more inclusive societies.

6,000 adolescent boys and girls benefiting from enhanced participation and empowerment in Italy

1,400 infants and young children accessing health and nutrition services in Bosnia and Herzegovina

In 2020 and 2021, UNICEF will further invest in strengthening national systems and improving reception conditions and access to basic services for refugee and migrant boys, girls and women. These efforts will complement tolerance, diversity and social cohesion programmes being implemented under the United Nations global compacts on refugees and migration.

UNICEF will support governments to align national policies with international norms and improve capacities to address the immediate and longer-term needs of refugee and migrant children. This will entail removing barriers to public health, education, protection and social welfare services. Social and other frontline workers will be trained to identify and mitigate health and protection risks, accompany children and caregivers through asylum procedures, and ensure timely referrals to specialized services. Teachers will be assisted to strengthen their approaches to intercultural education, teaching in a foreign language and life-skills education. Direct service provision in selected locations will enable accompanied and unaccompanied children and youth in reception facilities and urban areas to access integrated mental health and psychosocial support.

Priorities will include the provision of appropriate care to unaccompanied children, preferably in communities, in addition to legal aid and guardianship. Where needed (e.g., Greece), UNICEF will support governments with technical assistance and advocacy to facilitate the reunification and relocation of unaccompanied children within Europe. School-age children and adolescents will benefit from after-school support and catch-up classes to promote their inclusion in public schools. Pregnant and breastfeeding women will be supported to care for their children, including access to immunization. Gender-based violence survivors and at-risk groups will receive age- and gender-appropriate information, referrals and support. The engagement of young people through empowerment and skills-building will be scaled up across countries to boost youth resilience and provide young people with opportunities to share their voices and views.

At the regional level, in collaboration with other United Nations agencies and civil society, UNICEF will monitor risks, strengthen knowledge and support preparedness and response, including through the mobilization of technical expertise and resources when needed. UNICEF welcomes the European Union’s renewed commitments to solidarity, humane borders and burden sharing and is looking forward to supporting their implementation. Advocacy will focus on national and regional policy reforms that uphold children’s right to safe migration, improve best-interests determination and age assessment, put an end to child immigration detention and secure unhindered access to basic social services, including health care and education.

Humanitarian Action is at the core of UNICEF’s mandate to realize the rights of every child. This edition of Humanitarian Action for Children – UNICEF’s annual humanitarian fundraising appeal – describes the ongoing crises affecting refugee and migrant girls and boys in Europe; the strategies that we are using to respond to these situations; and the donor support that is essential in this response. 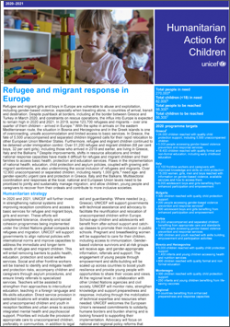 Download the full appeal to find out more about UNICEF’s work and targets for the Refugee and migrant response in Europe.
Download file
(PDF, 199,90 KB)