Pakistan remains affected by the malnutrition crisis in Sindh and Balochistan provinces, as well as the protracted conflict situation in Khyber Pakhtunkhwa merged districts. The country has a global acute malnutrition (GAM) rate of 17.7 per cent, exceeding the emergency threshold.

In Sindh and Balochistan provinces, which are experiencing drought-like conditions affecting 5 million people, the GAM rate is double the emergency threshold, exacerbating hardships for communities already vulnerable due to chronic poverty and food insecurity.

By October 2018, over 97 per cent of displaced families had returned to Khyber Pakhtunkhwa merged districts (16,780 families remain internally displaced). However, most of these families lack access to basic services, with 47 per cent of returnees using contaminated water and 64 per cent without access to health care. In addition, the country is facing a new crisis in Sindh.

While an estimated 165,000 people are living with HIV in Pakistan, including nearly 5,500 children under 15 years, the HIV situation in Larkana District, Sindh province, is much worse. Out of 34,000 people tested for HIV, more than 1,000 (833 children under 15) were found to be HIV positive. Unless concerted efforts are made to stop HIV transmission, this figure will increase.

215,000 people provided with access to water as per agreed standards

In 2020, in collaboration with the World Food Programme (WFP) and the World Health Organization (WHO), UNICEF will scale up integrated life-saving nutrition services, including community management of acute malnutrition and infant and young child feeding, in health facilities and mobile/satellite sites to address severe acute malnutrition (SAM) rates exceeding 10 per cent in 47 districts.

In line with the 2019 Drought Response Plan, UNICEF and partners will address government service delivery gaps, focusing on vulnerable populations and areas.

UNICEF's water, sanitation and hygiene (WASH) strategy will focus on strengthening service delivery through sustainable solutions that ensure WASH facilities in health and nutrition centres; and addressing gaps at the household and community levels.

In line with the United Nations and World Bank Merged Areas Transition Plan (2018–2020), UNICEF will meet humanitarian needs in Khyber Pakhtunkhwa merged districts by increasing access to basic services through systems strengthening and by building resilience.

The government-led HIV response in Larkana District will be supported through community-based and clinical HIV services. UNICEF will also strengthen national and sub-national capacities for disaster risk reduction and maintain contingency stocks to strengthen emergency preparedness.

Humanitarian Action is at the core of UNICEF’s mandate to realize the rights of every child. This edition of Humanitarian Action for Children – UNICEF’s annual humanitarian fundraising appeal – describes the ongoing crises affecting children in Pakistan; the strategies that we are using to respond to these situations; and the donor support that is essential in this response. 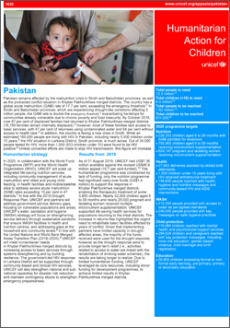 Download the full appeal to find out more about UNICEF’s work and targets for Pakistan.
Download file
(PDF, 1,57 MB)