Children on the Move in Mexico and Central America Appeal

Children on the move in Mexico and Central America snapshot

318,639 people accessing a sufficient quantity and quality of water

The increased flow of children on the move continues in Central America and Mexico. The movement has become multidirectional, with more families and children returning (both forced and voluntary) and traveling along irregular routes due to tightened border controls. This puts children at risk of abuse, exploitation and family separation. Children’s growth, development and well-being is under threat in what is truly a children’s crisis.

The recovery from the pandemic has been slow and unequal. Poverty remains high, and extreme poverty is expected to worsen in 2023. The situation is compounded by the global disruption of supply chains and inflation triggered by the war in Ukraine, and by the residual effects of natural hazards. These all challenge access to food, goods and essential services for the poorest, most shock-prone, migrant families and host communities. Some countries, for example Costa Rica and Mexico, have become hosts of migrants from other countries in the region, with influx of hundreds of thousands of migrants settling down each year, adding pressure on the existing services.

More than 120,000 unaccompanied children were apprehended at the southwestern border of the United States between October 2021 and July 2022 – a more than 13 per cent increase from the same period last year. And 2022 trends show an increase in the number of asylum applications, which has an impact in and beyond the region.

Violence is one of the main drivers of migration in the region. For many unaccompanied adolescents, staying home means limited future prospects and the risk of gang recruitments and death. Violence is also a main risk of migration. For example, the Darien Gap is controlled by armed groups. Migrants taking this migration route are exposed to robbery, physical and sexual assault and rape. Multiple protracted and compounding crises – due to climate hazards, sociopolitical turmoil, inequity, food insecurity, malnutrition and limited access to quality essential services – continue to fuel migration and internal displacement in the region.

The humanitarian needs of vulnerable children and families add pressure to existing services, often already scarce in remote communities, and overwhelm local authorities in transit and destination countries, especially during peaks or mixed mass movements ('caravans'). Violence, structural inequity and natural disasters uproot children and families within their own countries, and internal displacement is often considered a first step toward migration. In 2022, there are 900,000 internally displaced people in Mexico, Honduras and Guatemala alone.

With multiple protracted crises in the region, an increasing number of children are migrating and travelling longer journeys in pursuit of a better and safer life. UNICEF’s humanitarian strategy for the 2023 appeal will focus up to 80 per cent of activities on responding to their more acute needs. As the increased flow of migrants overwhelms services, with partners and governments, and guided by the Core Commitments for Children in Humanitarian Action, UNICEF will invest in addressing these acute humanitarian needs - such as access to safe water and sanitation facilities and psychosocial support for children at transit reception centres. UNICEF will also be a partner in building shock-responsive systems, for instance by supporting the creation and roll-out of alternative care or case management models and response protocols, reinforcing referral mechanisms and information systems on child protection issues or by strengthening social protection systems’ capacities to adapt in times of crises.

UNICEF ensures that the most vulnerable migrant children and families receive humanitarian support at both sides of borders by deploying capacities to monitor the situation of children in hotspots. An important component of this are mobile units that provide information, protection, water, sanitation and hygiene (WASH), health and nutrition services. UNICEF also works to strengthen the capacities of border authorities and partners and supports governments’ binational coordination mechanisms, information sharing and protocols.

UNICEF ensures the systematic inclusion of cross-cutting issues, such as protection from sexual exploitation and abuse and accountability to affected populations, as well as a focus on building the humanitarian-development-peace nexus. UNICEF’s evidence-based advocacy and humanitarian action is built on investment in information management and knowledge exchange, needs-assessment, close monitoring of humanitarian performance and evaluations. Grand Bargain commitments are mainstreamed across UNICEF strategies: localization; strengthening government and local actors’ capacities; accountability to affected populations; and ensuring the quality and impact of humanitarian cash transfers.

UNICEF mobilizes its regional and global network to ensure that adequate staff capacity is made available, including as global cluster lead agency for the WASH and Nutrition Clusters, and co-lead for the Education Cluster and the regional cash working group, and the Child Protection Area of Responsibility. In El Salvador, Guatemala and Honduras, UNICEF’s humanitarian action is aligned with inter-agency Humanitarian Response Plans.

UNICEF will continue its collaboration and coordination with other United Nations agencies, particularly with the Office of the United Nations High Commissioner for Refugees and the International Organization for Migration, through joint or complementary advocacy and response efforts addressing the needs of children and families on the move. Joint efforts will also support humanitarian coordination and systems strengthening - at national, subnational and sectoral levels.

Humanitarian Action is at the core of UNICEF’s mandate to realize the rights of every child. This edition of Humanitarian Action for Children – UNICEF’s annual humanitarian fundraising appeal – describes the ongoing crises affecting children on the move in Mexico and Central America; the strategies that we are using to respond to these situations; and the donor support that is essential in this response. 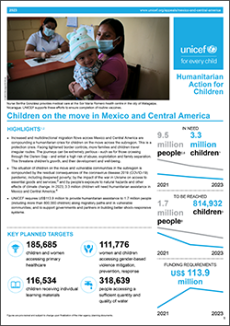 Download the full appeal to find out more about UNICEF’s work and targets for children on the move in Mexico and Central America.
2023 HAC appeal (PDF, 1 MB)