520,000 people accessing a sufficient quantity and quality of water

Throughout 2022, Madagascar continued to be confronted with multiple complex crises, including consecutive cyclones that resulted in destruction and damage in the east and southeast regions; prolonged drought affecting the south; and epidemics throughout the country. The socioeconomic impact of the coronavirus disease 2019 (COVID-19) pandemic and climate change-driven extreme weather events, coupled with structural issues, brought the country to a historically high poverty rate, with 81 per cent of people living below poverty line. This includes 1.3 million children. The situation has significantly increased social protection needs while putting basic services under pressure.

The slow recovery from three consecutive failed rainy seasons in the south has left more than 4.8 million people in need of humanitarian assistance. During the upcoming lean season (January-April 2023), an estimated 479,000 children will be malnourished, including 92,000 experiencing wasting. Around 1.9 million are already affected by very difficult access to safe water and sanitation. The water situation is expected to deteriorate further with another season of below-average rainfall during the current rainy season (October 2022 to April 2023), which could create a sixth consecutive below-average harvest.

The particularly intense cyclone season of 2022 affected 423,800 people in southeast Madagascar, causing 136 deaths and the widespread destruction of public infrastructure and crops. Consequently, five out of the six districts in these regions were classified as Integrated Food Security Phase Classification (IPC) Phase 3, or crisis level.

While Madagascar is prone to such epidemics as plague, measles and malaria, weak health services struggle to ensure continuity of basic services during crises.

Increased stress and economic pressure on families, exacerbated by the socioeconomic impact of the COVID-19 pandemic, further expose 533,000 children to violence, abuse and exploitation, including child marriage, child labour and multiple forms of gender-based violence. Humanitarian crises reduced households' resilience and potentially pushed them to resort to negative coping mechanisms, which mainly affect women and children. This situation, in turn, is exacerbated by chronic weaknesses of systems for monitoring, preventing and responding to violence, including gender-based violence.

UNICEF, in collaboration with the Government of Madagascar and partners, will provide a targeted, equity-focused and child-based emergency response. The multi-pronged approach addresses the humanitarian needs of the most vulnerable and hard-to-reach people and reinforces the resilience of the population and systems, including through behaviour change communication, gender mainstreaming and climate-sensitive actions at the local level. Building on its experience in recent crises in Madagascar, UNICEF will continue to co-lead coordination of the Nutrition and WASH Clusters as well as the education and social protection sectors.

UNICEF will prevent the deterioration of the nutrition situation by using high-impact prevention and response measures for wasting, reinforcing access to treatment and strengthening systems. This will be complemented by an integrated package of life-saving health interventions targeting newborns, children and pregnant women. The package will be adapted according to evolving the emergency situation, integrating water, sanitation and hygiene (WASH) to cover infection prevention and control interventions in health facilities. The WASH response will include contingency planning, capacity building for emergency and hazard management and provision of water and hygiene promotion activities and supplies (including menstrual hygiene products) through the Government and through non-governmental organizations. Humanitarian cash transfers will be put in place through the national social protection programme, in coordination with the Cash Working Group. The 2023 strategy adds a social service component to the cash transfer, hence the increased cost per beneficiary. The social protection platform at the community level will be used as a one-stop shop for accessing other services and support such as child protection, health and nutrition.

Education will prioritize facilitating the return of children in the drought- and cyclone-affected areas to school through the implementation of the new back to school strategy that includes strengthening capacities on education in emergencies, disaster risk reduction and the prevention of gender-based violence in and out of schools. UNICEF will also ensure a range of tailored interventions for adolescent girls, particularly in the areas of health, WASH, education and protection. Protection services will include prevention of violence through community-based intervention and provision of support to children and women who experienced violence. Areas of intervention include psychosocial support, reporting mechanisms and safe space. The nature of child protection needs has led to a stronger focus on systems strengthening and resilience building, and therefore an increased cost per beneficiary.

UNICEF, together with its partners, will strengthen coordination structures for the prevention of sexual exploitation and abuse to ensure that crisis-affected populations have access to appropriate interventions. All programmes have integrated social and behavioural change and community engagement to ensure the adoption of positive behaviours and improved knowledge and practices.

Humanitarian Action is at the core of UNICEF’s mandate to realize the rights of every child. This edition of Humanitarian Action for Children – UNICEF’s annual humanitarian fundraising appeal – describes the ongoing crises affecting children in Madagascar; the strategies that we are using to respond to these situations; and the donor support that is essential in this response. 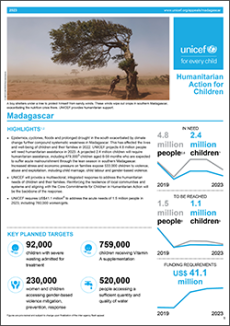 Download the full appeal to find out more about UNICEF’s work and targets for Madagascar.
2023 HAC appeal (PDF, 1 MB)