In 2020, all 10 districts of Lesotho are expected to face crisis levels of food insecurity. High temperatures are rapidly drying water reservoirs, impacting access to safe water for populations in need and increasing the risk of waterborne diseases, with a reported increase in cases of diarrhoeal disease in recent months.

Acute malnutrition is on the rise, particularly among vulnerable groups, including children under 5 years, pregnant and lactating women, people living with HIV and people with tuberculosis. Some 2,500 children are at risk of severe acute malnutrition (SAM).

Rising food insecurity is undermining HIV treatment adherence, retention and success. Families impacted by the drought are resorting to negative coping mechanisms to survive, including transactional sex and early marriage, both of which significantly affect women and girls. Children and women are at heightened risk of abuse, violence and other protection issues.

UNICEF will support the Government of Lesotho to respond to the humanitarian needs of 340,000 people affected by drought, including 213,400 children. This will include the implementation of life-saving interventions in nutrition, health, water, sanitation and hygiene (WASH), social and child protection, education and HIV and AIDS.

UNICEF will provide technical support on therapeutic nutrition and the prevention of wasting and stunting to manage SAM and other co-morbidities.

In WASH, UNICEF will provide life-saving access to drought-resilient water and hygiene services in communities, health care facilities and schools.

Given the high HIV prevalence rates in Lesotho, UNICEF will support the immediate humanitarian needs of women and children at risk of or living with HIV, including through continuous access to information and critical services.

UNICEF will also support the United Nations Humanitarian Country Team in the areas of disaster preparedness and contingency planning.

Humanitarian Action is at the core of UNICEF’s mandate to realize the rights of every child. This edition of Humanitarian Action for Children – UNICEF’s annual humanitarian fundraising appeal – describes the ongoing crises affecting children in Lesotho; the strategies that we are using to respond to these situations; and the donor support that is essential in this response. 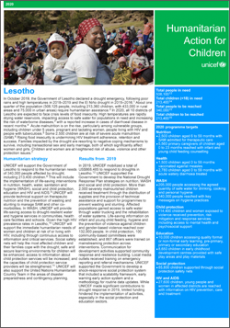 Download the full appeal to find out more about UNICEF’s work and targets for Lesotho.
Download file
(PDF, 223,92 KB)