700,000 children are at risk of severe acute malnutrition

60.9 million children have limited / no hygiene service at school

Between January and September 2021, over 1.9 million people, including some 624,000 children, were affected by mid- and large-scale disasters in 22 countries and territories. Thousands are still struggling to thrive after these disasters hit the region, in addition to the devastation caused by hurricanes Eta and Iota in 2020, in parts of Nicaragua and other countries.

In a region where 169 million children live in areas where at least two climate and environmental shocks overlap, and as the frequency and intensity of climate-related disasters increases, the consequences for children may be disastrous. With at least 4.2 million children facing crisis- levels of food insecurity in Haiti and Central America, and approximately 47 million people in the region living with hunger, the consequences for the nutrition, health and well-being of millions of children are concerning. Poverty, inequality, socio-political turmoil, paired with the long-term effects of the pandemic, have led to internal displacement and cross-border migration throughout the region, exacerbated protection risks including gender-based violence, resulting in humanitarian needs among the most vulnerable, including migrants and indigenous communities.

The UNICEF Regional Office will provide direct and remote support to country offices to address the increasing number of complex crises affecting children. This support includes technical assistance, quality assurance and oversight to ensure timely and effective humanitarian response in pursuit of the Core Commitments for Children in Humanitarian Action (CCCs), including cross-cutting programming (i.e., on gender, early childhood development, adolescents and disabilities). Emphasis will be placed on leadership and coordination to ensure the CCCs' roll out. The Regional Office will support country offices with human and financial resources when immediate response is required.

UNICEF will also focus on ensuring solid capacities and resources for emergency preparedness — in compliance with UNICEF’s Minimum Preparedness Standards — to provide effective humanitarian coordination and collaboration with governments and other partners, mobilize surge capacity, supplies and implement cash-based interventions at the onset of an emergency. UNICEF will invest in advocacy; feedback, monitoring and reporting tools for partners and affected populations; evaluation of humanitarian action; sector coordination; and protection of sexual exploitation and abuse, at all levels.

Across countries and sectors, UNICEF will work to ensure linkages between humanitarian action, development programming, climate change adaptation, risk management and resilience, including advocating for child-sensitive climate and environmental policies, promoting youth engagement and the implementation of programmes with a build-forward-better approach, with special focus on migration contexts. Grand Bargain commitments are mainstreamed across UNICEF’s strategies, including on localization, strengthening government and local actors’ capacities; accountability to affected population mechanisms; and ensuring the quality and impact of humanitarian cash transfers. UNICEF will continue supporting the response to residual humanitarian needs in parts of Nicaragua, following 2020 hurricanes Eta and Iota.

Humanitarian Action is at the core of UNICEF’s mandate to realize the rights of every child. This edition of Humanitarian Action for Children – UNICEF’s annual humanitarian fundraising appeal – describes the ongoing crises affecting children in Latin America and the Caribbean; the strategies that we are using to respond to these situations; and the donor support that is essential in this response. 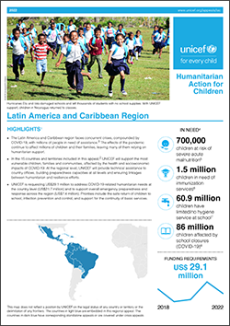 Download the full appeal to find out more about UNICEF’s work and targets for Latin America and the Caribbean.
Download file
(PDF, 3,03 MB)

Humanitarian Action and Emergencies
Latin America and the Caribbean