Due to the severe drought, an estimated 3 million people in Kenya will require food assistance and access to safe water by October 2019. The failure of two consecutive rainy seasons between October 2018 and May 2019 has hampered recovery and contributed to high levels of acute malnutrition, with the number of children with severe acute malnutrition (SAM) having increased by 15 per cent. By August 2019, 665,000 children under 5 years were acutely malnourished, including 145,000 children suffering from SAM.

The worsening drought conditions are contributing to resource-based conflicts, increasing child protection risks, such as separation from families for 130,500 children, and reducing access to schooling for some 560,000 children. Drought-related disease outbreaks have escalated, with nearly 4,000 cholera cases, 420 measles cases and 2,500 cases of kala-azar reported as of August 2019.

The next rainy season is expected to be above average, leading to flood-related displacement and disease outbreaks. Given that Kenya is a regional transit hub, the Ebola outbreak in the Democratic Republic of the Congo remains a threat. Kenya is among the top refugee-hosting countries in Africa, with over 477,000 refugees and asylum seekers reported as of July 2019, 56 per cent of whom are children.

110,597 children aged 6 to 59 months affected by SAM admitted for treatment

In response to the deteriorating nutrition situation in Kenya, UNICEF will support the Government and partners to conduct sector/multi-sector drought emergency preparedness and response planning at the national and county levels. UNICEF will foster nutrition sector coordination through the Emergency Nutrition Advisory Committee, enhance the nutrition supply chain system, and facilitate monitoring, advocacy and resource mobilization.

Coordination and evidence-based advocacy for preparedness and response to disease outbreaks, including Ebola, cholera and vaccine-preventable diseases, will also be strengthened. UNICEF will enhance capacities and pre-position critical supplies to facilitate the delivery of life-saving health interventions to unreached children. Capacities for emergency water, sanitation and hygiene (WASH) preparedness and response will also be strengthened through sector coordination and strategic partnerships that facilitate rapid response to emergency needs.

UNICEF will provide technical support and resources to strengthen advocacy and partnerships for protecting the rights of refugee children. This will include supporting an enabling environment and advocacy for education in emergencies; influencing resource allocation by county governments in disaster-prone areas; and strengthening refugee programming in line with the Global Compact for Refugees and the Comprehensive Refugee Response Framework. UNICEF will also support policy development to strengthen the enabling environment for a shock-responsive social protection system.

Humanitarian Action is at the core of UNICEF’s mandate to realize the rights of every child. This edition of Humanitarian Action for Children – UNICEF’s annual humanitarian fundraising appeal – describes the ongoing crises affecting children in Kenya; the strategies that we are using to respond to these situations; and the donor support that is essential in this response. 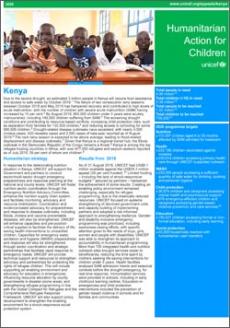 Download the full appeal to find out more about UNICEF’s work and targets for Kenya.
Download file
(PDF, 212,98 KB)