865,000 people accessing a sufficient quantity and quality of water

The current humanitarian situation in Iraq is a legacy of the 2013-2017 conflict, which displaced more than 6 million Iraqis. Although reconstruction and stabilization efforts have been initiated in the conflict-affected areas to promote the sustainable return of people under the durable solutions approach, significant challenges and needs remain. This is particularly true for returnees who live in remote and disputed areas, because there is limited government attention and resources for the provision of basic services.

As of September 2022, 1.2 million people remained internally displaced, while 4.9 million had returned to nearly 2,200 locations in eight governorates. With the abrupt closure of many camps for displaced people starting in October 2020, the in-camp population dropped from 256,861 in August 2020 to 179,325 in September 2022, while the number of displaced people living outside of camps reached 1 million, including 370,000 living in informal sites, often widely dispersed and with little access to services. Overall, humanitarian assistance for 3 million people, including 1.3 million children, remains critical. Nearly 1 million people (463,760 children) are considered to be in acute humanitarian need.

Additionally, the Government of Iraq started scaling up efforts to return Iraqi citizens from northeast Syria; an estimated 50,000 returnees from Al-Hol camp there are in need of multisectoral assistance and reintegration support. UNICEF and the International Organization for Migration are coordinating efforts to support the Government of Iraq to complete this return and reintegration. This will be a resource-intensive effort and will include providing support for children and young people who are physically and psychologically very vulnerable.

An estimated 680,000 internally displaced and returnee children face obstacles to accessing education. Some 699,000 children are in need of child protection services, while 990,500 individuals are at risk of gender-based-violence. Female-headed households, especially those of displaced people, as well as women and girls living with disabilities and people perceived to be affiliated with extremist groups are at increased risk of gender-based violence.

Iraq also faces significant challenges related to climate change, including water scarcity, which impacts peace and security throughout the region and globally. Iraq will face severe water scarcity in 2023, due to lower groundwater levels and reduced flows in the main rivers. An estimated 15 per cent of children will be affected by this in Iraq's central and southern governorates and will need humanitarian assistance. Overall, nearly 1.7 million people need access to WASH services in conflict-affected areas and in areas facing severe water scarcity and persistent cholera risks.

Multisectoral reintegration support is especially needed for families returning from northeast Syria. This will include peacebuilding elements for communities to ensure successful reintegration of sometimes highly stigmatized children.

UNICEF will continue to provide WASH services for displaced people where government services have not taken over and strengthen existing water systems in areas facing water scarcity. Using a systems strengthening approach, UNICEF will work closely with government counterparts to provide equitable and sustained access to health and nutrition services, including antenatal and post-natal care, immunization, nutrition screening, counselling and management of malnutrition.

Risk communication and community engagement will be enhanced to promote positive behaviour change. In all prorgammatic sectors, gender and disability-inclusive programming will ensure that the special needs of women, girls and boys and people with disabilities are addressed.

UNICEF will support the financial access of the most vulnerable households to essential commodities while facilitating their transition to the government’s social safety net programme. Capacity building of the Government and civil society partners will be done to identify, prepare for and respond to crises/shocks. Emergency preparedness activities will focus on addressing the impacts of water scarcity and disease outbreaks, including cholera, and enhancing the Government's capacity to respond to other potential emergency events.

UNICEF will work with other United Nations agencies and with civil society partners to ensure that this humanitarian strategy complements the durable solutions components thathave been included in the United Nations Sustainable Development Cooperation Framework for Iraq.

Humanitarian Action is at the core of UNICEF’s mandate to realize the rights of every child. This edition of Humanitarian Action for Children – UNICEF’s annual humanitarian fundraising appeal – describes the ongoing crises affecting children in Iraq; the strategies that we are using to respond to these situations; and the donor support that is essential in this response. 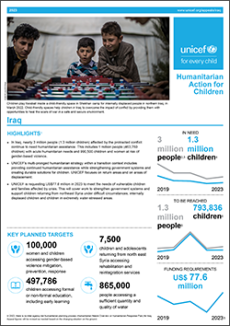 Download the full appeal to find out more about UNICEF’s work and targets for Iraq.
2023 HAC appeal (PDF, 2 MB)