Humanitarian needs in Guinea occur against the backdrop of a fragile political situation, weak essential social services delivery and a high risk of spillover of the central Sahel conflict, amplified by the porous borders Guinea shares with Mali.

The adequacy of WASH services in health facilities, schools and communities is another challenge to curbing outbreaks: 36 per cent of households lack access to basic water services, while 70 per cent lack access to basic sanitation. Only 64 per cent of schools have access to sanitation. An increase in flash flooding has further exacerbated needs and resulted in the destruction of more than 300 water points and nearly 400 latrines in Kankan Region alone, affecting nearly 30,000 people.

In 2023, more than 2.7 million children under 5 years of age will require polio vaccination, while 735,610 will need measles vaccinations, following the underutilization of health services during the COVID-19 pandemic and the 2021 Ebola outbreak.

The global acute malnutrition rate in Guinea is 9 per cent, while severe wasting stands at 4.1 per cent countrywide, indicating an emergency situation. The stunting rate is 30.3 per cent among children under 5 years of age. Anaemia is present in 75 per cent of children aged 6-59 months and in 46 per cent of women aged 15-49 years, in part due to poor dietary practices. Only 33 per cent of infants under 6 months of age are exclusively breastfed.

An estimated 1.6 million children of primary and secondary school age are out of school, mainly due to social norms, the socioeconomic situation of parents and the limited educational offerings. In addition, more than 4 million children are at risk of dropping out of school if there is further epidemic resurgence.

Two million people in Guinea are at risk of experiencing violence, including sexual violence. The risks are exacerbated by harmful social practices and the increased cost of living, which has been further exacerbated by the conflict in Ukraine. This situation leads children and adolescents to leave their families to embark on migratory routes or to work in very difficult and degrading conditions, particularly for girls.

In 2023, 4.7 million people, including 4 million children, will need humanitarian assistance.

In 2023, UNICEF will seek to reach about 3.5 million people in Guinea (including 3 million children) with humanitarian assistance. UNICEF's humanitarian strategy will support the continuity of essential services and access to social protection and enhance community engagement, surveillance and emergency preparedness and response.

To mitigate the risk of conflict spillover from the central Sahel, UNICEF will take a community-based approach to humanitarian action. This means strengthening the capacities of community-based organizations and early warning systems and working through community networks to reinforce resilience. People's vulnerability will be lowered by strengthening the capacities of state structures and other local actors in border areas to deliver safe, equitable and inclusive basic services.

To respond to the multiple epidemic threats in Guinea, UNICEF will support the continuity of health and immunization services through community-based surveillance, vaccination and procurement of essential medicines and critical pharmaceutical supplies. To prevent epidemics, UNICEF will also provide support to the Expanded Programme on Immunization of the Ministry of Health and Public Hygiene.

UNICEF will draw on its strong field presence and pre-positioned emergency supplies to ensure the timely response to disease outbreaks, natural disasters and conflict, in line with the Core Commitments for Children in Humanitarian Action, using a humanitarian-development nexus approach.

To address the immediate nutrition needs of children, UNICEF will focus on early detection through community health workers and adequate care for children with severe wasting through operational support to health centres and community platforms. To reduce malnutrition in the longer term, UNICEF’s response aims to increase the proportion of infants aged 0-5 months who are exclusively breastfed to 50 per cent by 2025 and the proportion of children aged 6-23 months who are receiving the minimum dietary diversity to 25 per cent. To achieve this, UNICEF will apply a multisectoral approach using health, food and social protection platforms.

In education, UNICEF will focus on supporting access to education and to continuity of learning in safe environments by facilitating access to learning materials and providing WASH services and hygiene supplies in schools and early learning centres. Building on good practices and lessons learned, UNICEF will also strengthen distance and digital learning approaches.

Children require protection from violence, abuse and exploitation as they face recurring disease outbreaks, social unrest and the impact of the increased cost of living. UNICEF will strengthen delivery of child protection services to children and families. Prevention of sexual exploitation and victims’ assistance will be a key part of this appeal.

UNICEF will provide technical and financial support to strengthen national social protection systems and make them shock-responsive. UNICEF will focus on emergency cash transfers to the poorest households and link emergency cash programming with the national unified social register.

Humanitarian Action is at the core of UNICEF’s mandate to realize the rights of every child. This edition of Humanitarian Action for Children – UNICEF’s annual humanitarian fundraising appeal – describes the ongoing crises affecting children in Guinea; the strategies that we are using to respond to these situations; and the donor support that is essential in this response. 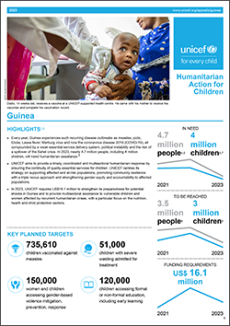 Download the full appeal to find out more about UNICEF’s work and targets for Guinea.
2023 HAC appeal (PDF, 2 MB)