The suspension of learning in more than 42,000 schools across the country due to the pandemic has adversely affected some 9.2 million basic education students, 500,000 tertiary education students, 450,000 teachers and 1,500 teacher educators directly employed by the Government. School closures have also impacted 61 schools for children with disabilities, impacting over 7,600 vulnerable learners.

Across the country, limited access to water, sanitation and hygiene (WASH) facilities is undermining effective infection prevention and control. More than half of the population of Ghana has not adopted effective handwashing with soap on a regular basis. Three basic schools in five lack a safe water supply, and two in five lack sanitation facilities. Health sector data show that about 25 per cent of health centres lack adequate water and sanitation facilities. The COVID-19 crisis led to a reduction in social service coverage and impacted nutrition treatment and prevention services delivered through health and school platforms.

Rapid assessments conducted by UNICEF and partners indicate that violence and abuse at home may be on the rise in the context of the COVID-19 pandemic. Thirty-two per cent of adolescents and young people reported having observed increased abusive behaviour within their families during the past two months, including financial abuse (34 per cent), emotional abuse (32 per cent), physical abuse (17 per cent), sexual abuse (10 per cent) and mental/psychological abuse (7 per cent). In addition, 32 per cent of respondents felt that caregivers treated them more harshly than before. Evidence also shows that there is a strong increase in child abuse cases and a decline in violence prevention programming (77 per cent decline) in the Greater Accra and Ashanti regions.

Beyond the health impacts of the pandemic, the socio-economic impacts of COVID-19 are expected to be wide-ranging in Ghana, and will pose a serious threat to poverty reduction and progress towards the Sustainable Development Goals. In 2019, 6.8 million Ghanaians were living in poverty, including 2.4 million Ghanaians who were extremely poor. Nearly three quarters of children in Ghana are deprived in three or more poverty dimensions; for children under 5 years, this proportion is even higher at nearly 83 per cent.

UNICEF and partners will support the Government's response to the COVID-19 pandemic, protect children and families from exposure to the virus, minimize mortality and ensure service continuity. These interventions will align with key global and national frameworks designed to identify gaps and target the most vulnerable groups, especially in high-risk areas.

Building on ongoing initiatives within the United Nations system and with other partners, UNICEF will strengthen service delivery systems, considering the needs of women, girls and people with disabilities, and consolidating the gains made in early childhood development. UNICEF’s humanitarian strategy in Ghana is aligned with its sector accountabilities and comparative advantages.

Noting that the COVID-19 outbreak has severely stretched emergency response capacities in Ghana, UNICEF will also strengthen preparedness, coordination mechanisms and community structures to confront other humanitarian risks. This work will draw on the linkages between UNICEF humanitarian action and development programming. The UNICEF communication for development programme will also work with partners to improve preparedness through risk communication and community engagement strategies.

UNICEF will strengthen the capacities of key district-level actors on child protection and gender-based violence case management and family tracing and reunification services. Counterparts will be equipped to provide psychosocial support and prevention services focused on sexual and gender-based violence and violence against children, and build individual and community resilience. UNICEF will support education preparedness and strengthen sector resilience, targeting the most vulnerable. Key WASH supplies will be pre-positioned to address the immediate needs of the most vulnerable people. UNICEF will also address gaps in skills and knowledge at the front-line and coordination levels. Laboratory services will be strengthened to improve diagnosis and the capacities of front-line health workers will be strengthened on infection prevention and control, cold chain management and essential health service delivery.

Humanitarian Action is at the core of UNICEF’s mandate to realize the rights of every child. This edition of Humanitarian Action for Children – UNICEF’s annual humanitarian fundraising appeal – describes the ongoing crises affecting children in Ghana; the strategies that we are using to respond to these situations; and the donor support that is essential in this response. 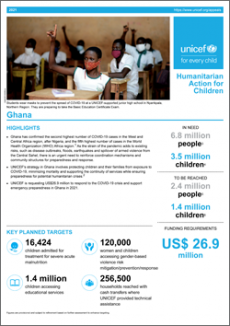 Download the full appeal to find out more about UNICEF’s work and targets for Ghana.
English (PDF, 2 MB)