Globally, climate change has resulted in changing human, animal and environmental situation. Moreover, the world is shaken by lack of adequate peace, security, social services and other needs. Similarly, Eritrea is affected by those situations and is characterized by harsh climatic conditions, including cyclical drought affecting groundwater resources and flooding during rainy seasons. These conditions erode the resilience of communities, making it difficult for families to recover from one emergency before another strikes.

In recent years, climatic conditions have tested the coping capacities of the population, which is largely dependent (80 per cent) on subsistence agriculture. This has negatively impacted child nutrition, and acute malnutrition among children under 5 years is a major concern. However, the Government-led accelerated high-impact nutrition programme has curbed the malnutrition situation; and the country has achieved significant progress in reaching malnourished children with quality interventions, resulting in an over 90 per cent cure rate.

Key drivers of malnutrition include poor dietary diversity and low parental awareness of appropriate nutrition and infant and child feeding practices. Climatic hazards also impact water supply, hygiene, sanitation and health services. Open defecation is a major public health issue, with faecal contamination of the environment and poor hygiene practices linked to child mortality and morbidity. In addition, between 220,000 and 340,000 children are out of school in Eritrea.

400,000 children under 5 years provided with vitamin A supplementation

115,500 children immunized against measles and rubella

Given the complexity of the humanitarian situation in Eritrea, in 2020, UNICEF will support Government-led accelerated high-impact interventions and apply an integrated approach to addressing malnutrition – particularly in remote and hard-to-reach communities – that involves multiple sectors and enhances programme convergence. This will include an integrated effort on the detection, treatment and prevention of malnutrition, focusing on nutrition-sensitive and nutrition-specific actions, including preventative programmes that circumvent malnutrition through early action interventions for those most at risk.

UNICEF will support community-based life-saving health interventions, postnatal maternal and newborn care and mobile outreach services to communities in remote and hard-to-reach locations. The strategy will also embrace sustainable and climate-resilient water supply systems and water safety. Access to improved sanitation and hygiene services will be supported through the Community-Led Total Sanitation approach.

To promote community resilience and reduce vulnerabilities, UNICEF will facilitate the development of multi-sectoral, sub-national risk communication tools that provide guidance on emergency communication and early warning. Additional priorities for 2020 include UNICEF's focused programmatic work and advocacy regarding female genital mutilation/cutting and under-aged marriage, as part of the broader gender and child rights policy focus in Eritrea.

Humanitarian Action is at the core of UNICEF’s mandate to realize the rights of every child. This edition of Humanitarian Action for Children – UNICEF’s annual humanitarian fundraising appeal – describes the ongoing crises affecting children in Eritrea; the strategies that we are using to respond to these situations; and the donor support that is essential in this response. 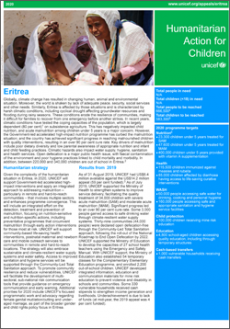 Download the full appeal to find out more about UNICEF’s work and targets for Eritrea.
Download file
(PDF, 207,29 KB)