Nearly 74,000 children under 5 years are expected to suffer from severe acute malnutrition (SAM) in 2020.

To date, more than 27,000 refugees have fled the Central African Republic and settled in Bétou, Republic of Congo, and some 21,000 refugees from the Democratic Republic of the Congo remain in the country. Access to safe water and sanitation services is limited among the refugees. Only 48 per cent of refugee households have access to adequate sanitation and 64 per cent have access to protected water sources.

The country is also hosting over 8,000 asylum-seekers from the Democratic Republic of the Congo, one third of whom are children, who are settled along the Congo River and are vulnerable to cholera. More than 77,000 internally displaced persons (50 per cent children) who returned to the Pool Department following a 2017 ceasefire agreement are struggling to access basic social services.

As of 30 June 2019, 16 schools are closed, impacting over 3,000 school-aged children. Children affected by conflict and loss of family urgently require psychosocial support. The risk of an Ebola outbreak remains high, with 500,000 people potentially exposed.

42,000 children aged 6 to 59 months affected by SAM admitted for treatment

In collaboration with partners, the response will focus on three key strategies:

UNICEF will focus on scaling up SAM management, complementing the World Food Programme's interventions related to moderate acute malnutrition. UNICEF will also strengthen coordination among sector and United Nations partners for gender-based violence in emergencies risk mitigation, including empowerment of women and girls and capacity strengthening on the prevention of sexual exploitation and abuse and sexual and reproductive health.

To strengthen the linkages between humanitarian action and development support, UNICEF will identify durable humanitarian-development solutions and reinforce community resilience and systems, focusing on health, WASH, education and protection, in collaboration with United Nations agencies. To address the lack of disaggregated data and data on people with disabilities, UNICEF will also support the national data collection system.

Humanitarian Action is at the core of UNICEF’s mandate to realize the rights of every child. This edition of Humanitarian Action for Children – UNICEF’s annual humanitarian fundraising appeal – describes the ongoing crises affecting children in the Republic of Congo; the strategies that we are using to respond to these situations; and the donor support that is essential in this response. 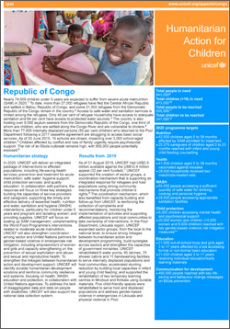 Download the full appeal to find out more about UNICEF’s work and targets for the Republic of Congo.
Download file
(PDF, 2,57 MB)