Burundi is one of the poorest countries in the world and one of the most densely populated countries in Africa. More than two thirds of Burundian children live in poverty. Years of socio-political and economic crisis have had a serious impact on the population's access to basic services and the resilience of systems and communities to cope with recurring crises. At the beginning of 2020, 1.7 million people in Burundi, including over 1 million children, were in urgent need of humanitarian assistance.

Burundi is particularly vulnerable to climate change and is affected by natural disasters that cause significant human and material damage throughout the year. Over 114,000 people – 83 per cent of the internally displaced population in Burundi – are displaced due to disasters. While the number of displaced persons has been steadily declining since 2018, in 2020, the number of displaced persons increased due to recurring high winds and rainfall. Increased temperatures and dry spells predicted for 2021 will negatively impact harvests and generate additional population movement, putting children at risk of protection violations, school drop out and undernutrition.

In 2020, Burundi's fragile health system confronted multiple health emergencies, including malaria, cholera, measles and COVID-19, among other issues. Since 2018, the country has mobilized efforts to prevent and prepare for a potential spillover of the Ebola outbreak from the Democratic Republic of Congo. The threat of an Ebola outbreak in 2021 remains significant, and Burundi will need to continue to strengthen its capacity to respond.

Following the 2020 elections, Burundi is expected to see a significant return of refugees, particularly those that sought refuge in Rwanda and the United Republic of Tanzania. Since 2017, over 88,000 Burundian refugees have received assistance to return home through the voluntary repatriation process supported by the United Nations High Commissioner for Refugees (UNHCR). Approximately 390,000 Burundians (56 per cent children) are still hosted in the Democratic Republic of the Congo, Rwanda, the United Republic of Tanzania and Uganda. Less than half of Burundian households report that their children have birth certificates, further undermining access to health and education services.

The nutritional situation of children remains poor. Burundi has one of the highest rates of stunting in the world, with more than half of children under 5 years suffering from chronic malnutrition. More than 63,000 Burundian children are at risk of severe acute malnutrition (SAM).

In 2021, UNICEF will reach children and families in Burundi affected by natural hazards, disease outbreaks, malnutrition and population movement with life-saving services. UNICEF's interventions will be aligned with inter-agency strategies, including the Burundi Humanitarian Response Plan, the COVID-19 Strategic Response Plan and returnee reintegration and refugee plans.

In line with its Grand Bargain commitments, UNICEF will strengthen the linkages between humanitarian action and development programmes in Burundi, and reinforce the resilience of systems and communities. This will include expanding disaster risk reduction and emergency preparedness interventions and establishing medium- and long-term solutions while continuing to respond to immediate humanitarian needs.

To enable an effective response to several crises simultaneously and optimize the impact of available resources, response efforts will be pooled to the extent possible. For example, the response to health emergencies will build on existing approaches to preventing and/or responding to cholera, Ebola and the COVID-19 pandemic. UNICEF will also expand the reach of its refugee response by making services for returnees and refugees accessible for host communities.

Across its humanitarian strategy in Burundi, UNICEF will adopt a holistic, multi-sectoral approach to address the needs of affected and at-risk populations. UNICEF's position as the lead agency for the water, sanitation and hygiene (WASH), education, nutrition and child protection clusters and co-lead of the health sector will enable this approach. The emergency response will be complemented by a social protection component to reduce the impacts of shocks on other sectors. Communication for development will be mainstreamed throughout the response and used to disseminate essential information on accessible services and preventive/protective measures for affected and at-risk communities. By including youth in behaviour change and mobilization actions as key engagement actors and vectors of change in their communities, UNICEF will support young people to develop key skills and become active participants in the response.

UNICEF will take steps to increase the integration of gender-based violence risk mitigation in all sectors, and scale up gender-based violence prevention and response programming. Strong emphasis will be placed on accountability to affected populations to facilitate the participation of communities in the humanitarian project cycle and in the establishment of feedback and complaint mechanisms.

Humanitarian Action is at the core of UNICEF’s mandate to realize the rights of every child. This edition of Humanitarian Action for Children – UNICEF’s annual humanitarian fundraising appeal – describes the ongoing crises affecting children in Burundi; the strategies that we are using to respond to these situations; and the donor support that is essential in this response. 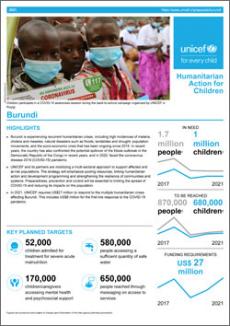 Download the full appeal to find out more about UNICEF’s work and targets for Burundi.
Download file
(PDF, 4,14 MB)