Angola is facing the worst recorded drought in 40 years. The Government report projected 7.3 million people were exposed to drought in the second quarter of 2021 (MAM). By January 2021, 3.8 million people affected by drought were reported to have insufficient food consumption, according to a United Nations World Food Programme food security assessment conducted in April 2021.This represents an increase of over 135 per cent compared to the previous year. While the impact of the drought can be felt throughout the country, it has more severely impacted six provinces: Cuanza Sul, Benguela, Huambo, Namibe, Huíla and Cunene. Luanda and other urban areas remain also most vulnerable due to secondary impacts of COVID-19 and other disease outbreaks, as well as poverty.

The humanitarian situation in Angola continues to deteriorate with over 3,000 internally displaced people reported in Cunene, notably Ombadja and Cahama municipalities. In addition, this drought comes on the back of three consecutive failed agricultural harvesting seasons with crop losses of 40 per cent and negatively impacting family and household income and livelihoods. An estimated 1.2 million people are facing water scarcity as a direct consequence of the drought and will have their water, sanitation and hygiene conditions compromised, exacerbated by COVID-19. Water, sanitation and hygiene (WASH) study has found that many water points in the most drought-affected communes are not working, highlighting a critical gap for water, sanitation and hygiene.

Severe acute malnutrition (SAM) admissions among children 6 to 59 months at mid-year 2021 have already exceeded the 2020 total caseload. Recent survey results revealed that between July and September 2021, around 1.32 million people experienced high levels of acute food insecurity. Protection risks in the most drought-affected provinces have heightened, particularly for women and children.

By the end of September, a total of 57,247 confirmed cases of COVID-19 were recorded in the country, with 7,749 active cases and 1,548 deaths (2.7 per cent). Drought and COVID- 19 undermine and disrupt health, education, nutrition, water, sanitation and hygiene and socioeconomic sectors, while cases of gender-based violence (GBV), child labor and child marriage increase.

More than 2.3 million children are out of school in Angola. In the south of Angola, access to education has been jeopardized by drought. Most children in drought-affected areas have limited or no access to TV or radio distance learning programmes.

Angola is also prone to other health emergencies such as malaria, measles, vaccine derived polio, yellow fever and cholera.

UNICEF's humanitarian strategy is underpinned by the Core Commitments for Children (CCC) in Humanitarian Actions and focuses on supporting the Government to implement timely coordinated interventions to humanitarian crises affecting children and women. Humanitarian Action for Children (HAC) is delivered through life-saving water, sanitation and hygiene (WASH), health, nutrition, education, child protection, gender-based violence in emergencies (GBViE) and communication for development (C4D) interventions. At the United Nations humanitarian coordination level, UNICEF leads the nutrition, WASH and education sectors and co-leads protection, providing interagency coordination and humanitarian leadership. HAC in Angola is planned with a multi-hazard focus – drought, flood, conflict and refugee situations, and health emergencies including COVID-19. In drought and flood emergencies, the immediate response focuses on lifesaving interventions but also includes resilience building of the affected populations through preparedness, mitigation and risk reduction approaches. In health emergencies, priority is on emergency vaccination, diagnosis and case management, risk communication and community engagement and infection prevention and control with focus on health and water, sanitation and hygiene to ensure the containment of disease outbreak and further prevent the death of children and women from preventable diseases.

In the nutrition sector, the most vulnerable children 6 to 59 months and their caregivers will be targeted with essential life-saving nutrition services, including the detection, screening and treatment for acute malnutrition. UNICEF works to support education in emergencies in two main ways: i) strengthen capacities of teachers and principals for safe and secure learning environments, emergency response and preparedness, multi-grade teaching, ICT and school management in the context of the pandemic; ii) provide tents and learning kits to support children's access to school.

UNICEF has partnerships and cooperation agreements with NGOs aimed at supporting humanitarian programming and monitoring on the ground. UNICEF co-chairs the United Nations disaster management team. At the government level, UNICEF works with the National Commission for Civil Protection and line ministries. Internally, it has an active and operationally functional emergency management team, chaired by the Representative. UNICEF maintains three field presences, providing logistical, coordination, programmatic and monitoring support to preparedness and response.

Through protection intervention, targeted communities will be sensitized on prevention and risk mitigation of GBV. Accountability to affected populations (AAP), including community-based complaint and feedback mechanisms, will also be strengthened to identify potential entry points for safe and confidential reporting of sexual exploitation and abuse allegations by beneficiaries.

Heightened advocacy will be undertaken to raise awareness about the situation of children in Angola. Partnerships remain a central pillar to mobilize resources and support to address the severe crisis.

Humanitarian Action is at the core of UNICEF’s mandate to realize the rights of every child. This edition of Humanitarian Action for Children – UNICEF’s annual humanitarian fundraising appeal – describes the ongoing crises affecting children in Angola; the strategies that we are using to respond to these situations; and the donor support that is essential in this response. 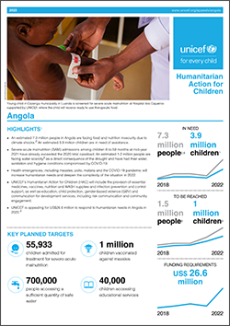 Download the full appeal to find out more about UNICEF’s work and targets for Angola.
Download file
(PDF, 2,05 MB)