The Angolan government and partners have provided continuous support towards USI implementation and have moved the country from a severe to an only mild iodine deficiency problem. Because the national mUIC is now just sufficient in nonpregnant women, Angola is now classified as a country with Optimal iodine nutrition.
However, some subgroups are still at risk of iodine deficiency, including pregnant women. This requires immediately action. The Government recognizes that the unavailability of adequately iodized salt in Angola is a matter of food security. It has taken this issue for immediate consideration and spurred actions to improve the
distribution of iodized salt throughout the country. Read more on the latest edition of IDD Newsletter. 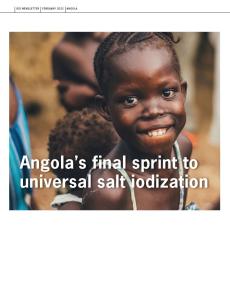