Time to end sexual abuse and exploitation of children in Albania

#TëBesoj is a public installation, consisting of children’s silhouettes (boys and girls) each bearing a story of a real sexual abuse and exploitation that happened to a child in Albania. Behind each story, there is a real child, a real person, still suffering the consequences from the abuses that happened to them. Through this campaign we aim to  to raise awareness on the issue of child sexual abuse and exploitation; foster a culture of speaking up about the phenomenon; encourage authorities to urgently prioritize policies and actions.

Join us, join #UNICEF Albania in spreading the message so we can put an end to Sexual Abuse of Children.

The #TeBesoj Campaign and the installation of silhouettes moves to Pedonale in Tirana.

The #TeBesoj Campaign and the installation of silhouettes moves to Durres.

A serious case of child sexual abuse and exploitation came to light in the end of May 2020 in Albania, concerning one or perhaps more children being abused and sexually exploited by a school guard, under threats and menaces. The case is one of many that have come to light in recent years, and yet estimated to be only around 1% of sexual abuse and exploitation happening to children.

After such case came to public opinion, in many social media networks boys and girls as well as men and women have started to share their personal stories, often for the very first time.  This brings not only an end to the sense of isolation many people carry with them for years and helps people deal with the consequences of an abuse which they have suffered when young and carried out for a long time. But it also reveals closer to the truth the scale of the problem, changing the perception that child sexual abuse is an exception, but rather a widespread phenomenon that is estimated to concern 1 in 5 children.

Far from normalizing this phenomenon, bringing a better understanding of the scale of the problem, should on the one hand urge authorities to prioritize policies and actions to prevent and respond to child sexual abuse, and on the other hand should create a more enabling environment for children to disclose and report cases of child sexual  abuse.

Description of the Public Installation

What: The public installation will consist of:

When: The installation is planned to be active for the period September 2020- March 2021 involving several installation points in Tirana and several other major cities in the country.

Where: The silhouettes will be placed in central public spaces in the main cities of Albania starting from Tirana. The opening of the installation in Tirana will be marked by a public launching event with wide media coverage. The installation will stay for 2 to 4 weeks in each location as per a pre-determined calendar.

The aim of the installation

#TëBesoj (I believe you, I trust you) is a public installation by UNICEF Albania, consisting of around 50 children’s silhouettes (boys and girls) each bearing the story of a real sexual abuse and exploitation that happened to a child in Albania.  Behind each story, there is a real child, a real person, still suffering the consequences from the abuses that happened to them. The stories do not have the names of children or any other information that may lead to their identification. Most of the stories are of children who are now adults. They have been collected from UNICEF’s partner organizations.

Child sexual abuse and exploitation is not an isolated phenomenon, but rather widespread and happening at a large scale involving many more children that what we know. These adverse experiences directly and very negatively affect children’s health and physical, emotional and mental wellbeing, and often they accompany the child throughout their life. Building on UNICEF’s #ENDViolence global campaign to make all forms of violence against children visible and spur action, this installation will contribute raising awareness on the issue of child sexual abuse and exploitation and encourage reporting of violence.

#TëBesoj aims to promote a culture of speaking up about violence and abuse, especially sexual violence committed against children. #TëBesoj conveys the message that children should be believed when they report sexual abuse, and that as adults we should be ready to be the person that a child trusts to tell. No abuse committed is the victim’s fault, and if we don’t speak out, abusers will not be identified and prosecuted, and the vicious circle will not be broken.

#TëBesoj aims to urge authorities to prioritize policies and actions to urgently and pro-actively prevent and respond to child sexual abuse. It is paramount that all children and adults who wish to disclose and report cases of child sexual abuse be provided with outmost care and sensitive support. 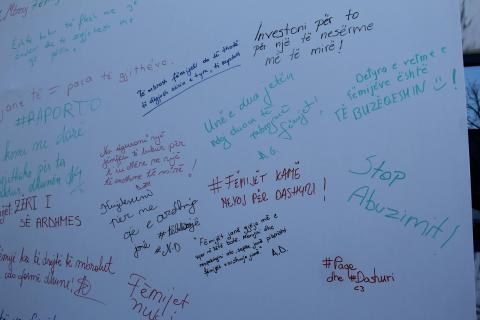 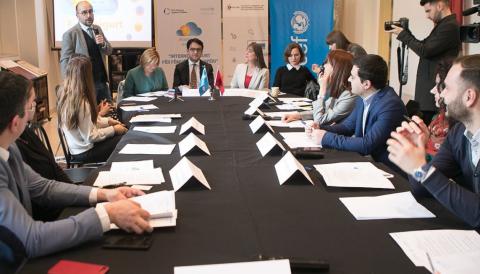