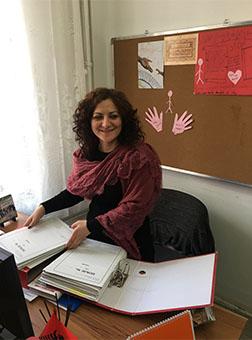 January 24th 2018 is a sunny day and we are in the city of Peshkopi, located in the northeastern region of Diber, Albania. It has a population of 50,000 inhabitants, with  5,000 children among them attending nurseries, kindergartens, and schools or just staying home nowadays.. How is it like for a child to live in Peshkopi? What are their dreams and what difficulties do they face? We spoke to Ejona Cania, who is the Child Protection Worker at the Municipality of Peshkopi.

Ejona receives us in her small office at the Municipality premises, which she shares with two other people: the colleague responsible for  issues related to Roma and Egyptian communities and a volunteer from the local office of ARSIS organization. This is the third year she has been working as a Child Protection Worker, after her graduation from the Department of Psychology at the University of Tirana and her postgraduate studies on social work. Unlike her friends who chose to stay in Tirana after their university studies, she returned to her hometown to work with children.

I have always wanted to work with children. I have worked as a volunteer at a local organization here before I joined the municipality team. There are plenty of needs to be met and a great number of children who are in need of protection.

In 2017, Ejona followed 21 cases of children at risk of violent abuse, due mainly to situations of domestic violence. When she compares this figure with the 7 cases she handled in 2016, she says that the increase is not indicative of the deterioration in the field of child rights, but rather of the heightened awareness among children who are ever more reporting cases of violence against them. In most of the cases, it is the children themselves or their mothers who contact Ejona to report an abusive behavior in their family.

“The mentality here is that whatever happens in the family shall stay in the family. Parents are very authoritarian and children are expected to obey adults“, she points out.

Such mentality is so strong and widespread that it is fostered by the same institutions that are supposed to protect children. Ejona recalls the case of a judge who refused to issue a Protection Order for a teen girl who was at risk of being abused by her sick father. “You should be ashamed of reporting your own father!” - he told the girl in the courtroom. In another case, the police officer persuaded a 13-year-old girl to withdraw the complaint against her abusive father.

This is why Ejona puts great importance on the strengthening of cooperation among partner institutions. She regularly invites them to meetings on specific cases, as required by law, but they do not always attend.

As we are talking, Ejona brings out a thick-cover file from the drawer under the table. This is the file in which Ejona keeps all the documentation on the closed cases. Ejona is very careful about handling documentation, beginning with the file name which she has covered, because it contains confidential information. She learned this as part of the cooperation with ARSIS organization. Access to the ARSIS online case management system, helped Ejona, among other things, to also create a database, which she makes use of  when she needs to document the actions taken under a specific case.

For example, one of the recent cases she took care and which she is very proud of, is the case of a teenager, who was at risk of sustaining domestic violence by her mentally ill father. Unable to control his temper because of refusing to take his pills, he indulged in alcohol and became violent to his two daughters.  The teenage girl informed Ejona about the situation. After many attempts, Ejona managed to accommodate the girl in a dormitory nearby, until the situation with the father calmed down. The other sister stayed at their aunt’s for 3 months. Following the special treatment in the Shkoder hospital, the father’s condition is now stable and after thorough assessment of the situation by the Child Protection Worker, the girls may return home. Ejona meets with them regularly to be in control of the situation.

“We do not have an emergency center for children, no set budget to provide support for the rent, or food/clothes packages,” Ejona says. “We rely on help from organizations, such as World Vision or Arsis, but this is not enough”, she acknowledges. Nevertheless, she is hopeful that the new social plan, which the municipality is preparing, will take into account such needs.

We are heading off Peshkopi with the feeling that the change in Diber lies in children. As they become more aware of their rights, they raise their voice and ask for change. Ejona is there by their side, doing her best to support them, but she needs support, too. 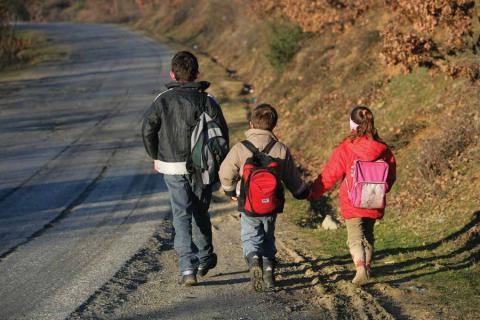 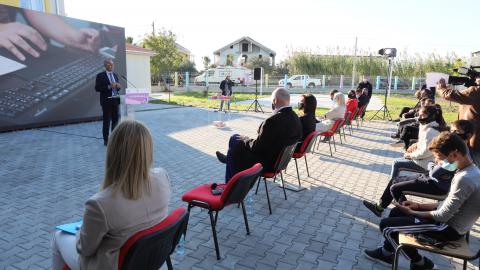 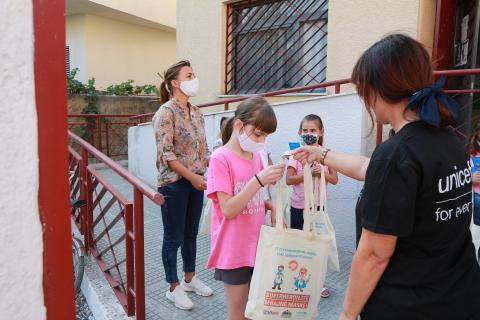