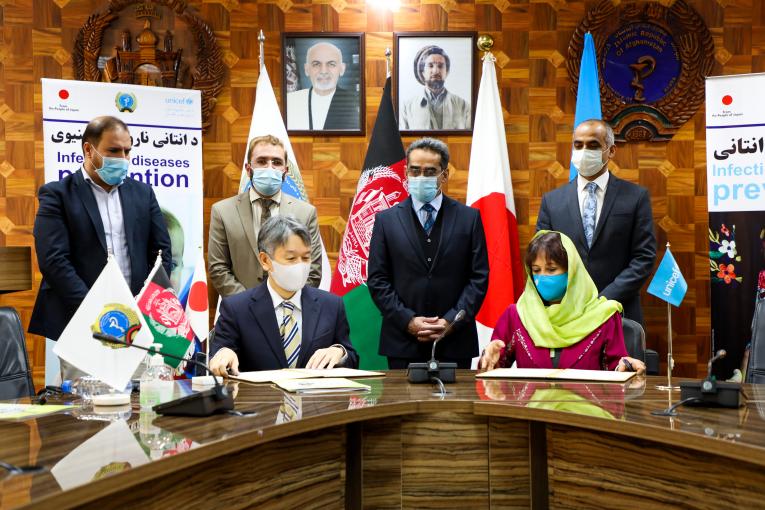 Kabul, Afghanistan, 10 November 2020 – The Government of Japan has pledged approximately 9 million USD (940 million Japanese Yen) in support of UNICEF’s drive to provide life-saving interventions, addressing urgent needs and rights of Afghanistan’s children and women. Mr. Takahashi Yoshiaki, Chargé d’Affaires ad interim of the Embassy of Japan in Afghanistan, and Ms. Sheema Sen Gupta, United Nations Children's Fund (UNICEF) Representative ad interim in Afghanistan, signed the agreement in the presence of His Excellency, Dr. Ahmad Jawad Osmani, Acting Minister of Public Health. The project will be implemented by UNICEF and Japan International Cooperation Agency (JICA), in partnership with the Ministry of Public Health.This grant will enable UNICEF and its partners to vaccinate more than 1.4 million infants as part of the expanded program on immunization (EPI), protect around 10 million children under five years, and provide more than 3.1 million women of child-bearing age with tetanus toxoid vaccine. Meanwhile, this grant will contribute to Sustainable Development Goal 3 (SDG3), that focuses on healthy lives and promotes the well-being of all children of all ages. Importantly, it will contribute to the global efforts to eradicate polio, especially in Afghanistan, which is one of only a few countries in the world yet to eliminate polio. “The Government of Japan has aided different sectors in Afghanistan for many years. This specific support will help the Government of Afghanistan in providing quality and equitable vaccination services to mothers, newborns and under five-year-old girls and boys”, said H.E Dr. Ahmad Jawad Osmani acting Minister of Public Health. H.E Dr. Osmani further highlighted the importance of this contribution, and assured Japan and UNICEF of their usual quality immunization service delivery to target women and children with special focus on polio eradication.

Japan’s financial support will contribute to key national priorities including: children under one year to achieve and sustain immunization of all antigens, at 90% national level coverage and 80% district level coverage; reduction of measles to less than 5 cases per million population; and reduction of neonatal deaths caused by neonatal tetanus to less than 1 case per 1000 live births. "Unfortunately, Afghanistan is still one of the only a few countries that have not yet eliminated polio.  Therefore, we sincerely hope that Afghanistan become a polio-free country in the near future like other countries on the globe." said Mr. Takahashi Yoshiaki, Chargé d’Affaires ad interim of the Embassy of
Japan in Afghanistan.“Every year, half a million children miss their vaccinations due to challenges beyond their control: ongoing conflict, harsh terrain and inclement weather, low demand among communities caused by rumour and misinformation. This grant is vital to overcome the gaps in vaccinations and deliver vaccines to every child in Afghanistan,” said UNICEF Representative ad interim in Afghanistan, Sheema Sen Gupta. Japan has been assisting Afghanistan’s nation-building efforts in various fields, including security, infrastructure, agriculture, rural development, human capacity development, education, health, culture and humanitarian assistance. The cumulative Japanese assistance to Afghanistan since 2001 amounts to approximately 6.8 billion USD. 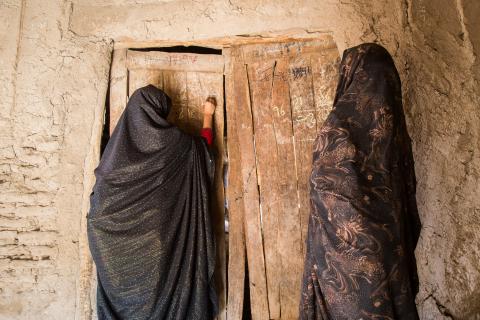 More than a vaccine